2014 Report on Cover-up over Toxic Pollution 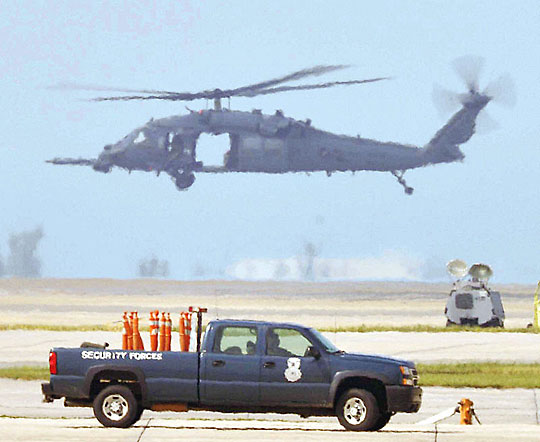 In the late 1980s, the United States military discovered levels of toxic polychlorinated biphenyls (PCBs) at land on Kadena Air Base that exceeded safe standards by many orders of magnitude, suggests an in-house report obtained by The Japan Times. Despite the possible risks to service members and local Okinawans, it appears the U.S Air Force failed to alert Japanese authorities and has been concealing information about the contamination — which potentially remains dangerous today — for more than 25 years.

According to the documents, base officials discovered the pollution following a November 1986 accident in which 20 gallons (76 liters) of oil spilled from an electrical transformer at an open storage area within Kadena. Subsequent environmental tests conducted by a military laboratory in the U.S. revealed in March 1987 that the spilled oil contained PCBs at a concentration of 214 parts per million (ppm) — but the soil was contaminated at 2,290 ppm. A second round of tests, returned in October 1987, showed soil contamination of 5,535 ppm.

The report — written on Dec. 1, 1987 — concluded that the pollution must have predated the accident: “It appears that the incident [the November 1986 spill] merely ‘opened a can of worms.’ Soil sampling in the open storage yard would have yielded high PCB levels whether the spill had occurred or not.”

The cited results of both the soil and oil tests are far above international safe levels. For example, at the time the pollution was discovered, the level at which cleanup efforts are required for PCBs in soil stood at 3 ppm; in the U.S., it was 25 ppm. Today, Japan’s regulations are much stricter — as low as 0.03 ppm — and the U.S. allows the 25 ppm level only for industrial areas in which people spend short amounts of time that lessen their risk of exposure.

In the last century, PCBs were commonly used as coolants in electrical transformers, but their manufacture was banned in 1979 due to increasing evidence of their health risks. Today they are categorized as persistent organic pollutants that damage the nervous, immune and reproductive systems, as well as being linked to cancers. PCBs do not deteriorate in the environment and they can continue to contaminate the soil for many decades.

According to the U.S. Environmental Protection Agency, some of the highest levels of soil contamination it has uncovered on Superfund sites in the U.S. have peaked at 750 ppm — far lower than those reported at Kadena.

After Kadena officials discovered the contamination in 1987, they tasked First Lt. Bob McCarty, deputy chief of public affairs for the 313th Air Division, with preparing a plan of action to deal with the crisis. The seven-page document that McCarty wrote — which he provided to The Japan Times last month — details the levels of contamination as well as the possible political, financial and health ramifications of the discovery.

Politically, the report spelled out concerns that news of the contamination might damage the standing of Gov. Junji Nishime, a supporter of the U.S. military presence on Okinawa, in the run-up to prefectural assembly elections in June 1988.

“As a leader of conservative politics on Okinawa faced with a matter holding much potential for scandal, his constituents and fellow conservatives will force him, at least in appearance, to put pressure on USFJ [U.S. Forces Japan] commanders and demand answers to tough questions about the incident,” the documents states.

Calculating the financial repercussions, the report estimates that clean-up costs at the contaminated storage site may reach $190,000 — approximately $400,000 in today’s terms.

However, perhaps the most serious concern raised in McCarty’s report was the fear that Kadena’s contamination — if made public — would prompt demands for widespread tests on other U.S. bases.

“Since the level of island-wide PCB contamination, if any, has not been determined, both USFJ and GOJ [government of Japan] officials will be pressured to test soil samples from high-risk sites . . . at all USFJ installations,” says the report. “The potential for soil contamination at sites on other USFJ installations on Okinawa exists.”

In 1987, according to the document, USAF owned 1,480 pieces of equipment that were potentially contaminated with PCBs.

With the stakes so high and U.S. forces vulnerable to accusations of a cover-up, McCarty told The Japan Times that he felt transparency was the best way forward. He recommended briefings to explain the situation to Gov. Nishime and the mayors of Okinawa City, Kadena and Chatan, the municipalities bordering the Kadena base.

Apparently the merits of this approach were not shared by his superior officers. “I do not believe the report was ever passed along to GOJ or OPG [Okinawa Prefectural Government] officials. If it was, then I was not informed about it,” McCarty wrote in an email.

Okinawan authorities appear to support his suspicions. For example, Seiryo Arakaki, the current chairman of Okinawa Prefectural Assembly’s special committee on U.S. bases, said that he had never heard of the contamination.

“When the U.S. military discovered the pollution, it should have released the information immediately and it should have clarified its clean-up efforts — if any — of the site,” he said.

Arakaki also expressed concern that the PCBs continue to pose a risk. “A new survey must be conducted to find out whether the contamination still exists as well as the extent of the soil pollution. It is questionable whether the U.S. would disclose facts of the environmental contamination so third party, non-governmental checks are necessary.”

Komichi Ikeda, adviser at Environmental Research Institute Inc., Tokyo, believes Arakaki’s fears are justified. Her organization has conducted more than 1,000 tests for PCBs — most involving electrical transformers — but she says she has never encountered levels of soil contamination as high as those reported on Kadena.

“The soil needs to be investigated to see what other dangerous substances — such as dioxins — may be present. PCBs are stable so there may be a long-term risk for the area. With this in mind, groundwater samples need to be taken to assess whether any contamination has spread,” Ikeda said. She urged health checks for both the workers potentially exposed in the 1980s and those currently assigned to the storage site.

A number of previous incidents have highlighted PCB pollution on Okinawa. In the 1990s, trunks of contaminated electrical transformers were reportedly abandoned outdoors on Kadena and the poisons were also detected on land that, until 1995, had been part of Onna Communication Site. Last year, traces of PCBs nine times higher than normal were discovered in wild mongoose tested near MCAS Futenma and Makiminato Service Area (Camp Kinser).

McCarty’s report appears to be the first time that in-house military documents have been made public, and the Pentagon’s apparent failure to disclose the findings to Japanese authorities suggests the lengths to which it will go to hide evidence of contamination on Okinawa.

“I kept copies of my action plan for more than 20 years because I knew the information the plan contained might vanish if I didn’t keep it,” McCarty said.

In recent years, growing awareness of military contamination has angered many Okinawans and mainland Japanese people. Under the U.S.-Japan Status of Forces Agreement (SOFA), the U.S. military in Japan is not responsible for the remediation of any pollution within its bases, nor is it obliged to allow Japanese officials access to its installations to conduct environmental tests.

In December, U.S. Secretary of Defense Chuck Hagel announced the two countries would negotiate an environmental stewardship agreement to supplement the existing SOFA, with the “shared goal of reducing impact to Japan’s precious natural landscape.” The first round of talks between the two governments took place on Feb. 11 in Washington with further discussions planned for Tokyo in the near future.

Next month, Okinawa Prefecture will open a new division dedicated to investigating environmental pollution on former base land scheduled for return to civilian usage.

On March 12, The Japan Times asked USFJ for comment on the issues raised in this article but, at the time of publication, no statement had been received.