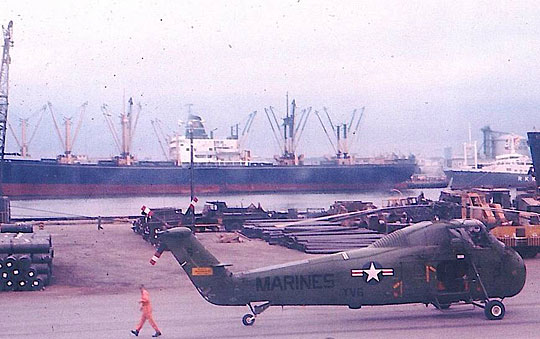 The U.S. Department of Veterans Affairs has granted compensation to another former service member for exposure to Agent Orange while stationed on Okinawa during the Vietnam War era. Dated October 2013, the award was made to a retired marine corps driver suffering from prostate cancer that, the presiding judge ruled, had been triggered by his transportation and usage of the toxic defoliant on the island between 1967 and 1968.

The decision to grant the claim comes in spite of repeated Pentagon denials that Agent Orange was ever present in Okinawa.

According to the ruling of the Board of Veterans’ Appeals (BVA), the unnamed marine alleges he came into contact with Agent Orange while transporting it in barrels and rubber bladders between U.S. military ports at Naha and White Beach — a navy installation on the island’s east coast — and a warehouse on Kadena Air Base. He also claims to have sprayed the defoliant in the Northern Training Area, in the Yanbaru jungles, to keep back foliage and reduce the risk of forest fires.

The former marine was able to identify the barrels he helped to transport as the infamous Vietnam War defoliant due to the tell-tale orange stripes painted around their middles.

The retired service member had first applied for compensation in 2004 but his claim was initially rejected. Following appeals by the veteran, Judge Mary Ellen Larkin ruled in his favor last October, stating, “While neither the service department nor DOD confirms the presence of Agent Orange on Okinawa during 1967 and 1968, the veteran offers a highly credible, consistent account that he was directly exposed thereto during those years while performing his assigned military duties.”

According to U.S. government records and interviews conducted by The Japan Times, more than 250 former service members claim to have been sickened by exposure to Agent Orange on Okinawa, but only a handful have ever been given help by their government. Other veterans who have successfully sued for compensation include a former marine stationed on the main island during the early 1960s and a retired army truck driver exposed while driving the defoliant from Okinawa’s ports to Kadena Air Base between 1965 and 1966 (see “Vets win payouts over Agent Orange use on Okinawa,” Zeit Gist, Feb. 14, 2012).

This latest win is believed to be the first time a veteran has been awarded compensation since the Pentagon issued a 29-page report in February 2013 denying Agent Orange had been present on the island. That report, written by former USAF Col. Alvin Young, came under fire from experts for failing to order environmental tests or interviews with any veterans alleging exposure on Okinawa.

In comments to The Japan Times regarding the latest VA ruling, Defense Department spokesman Mark Wright reaffirmed the Pentagon’s confidence in the credibility of Young’s report.

“The research showed that there are no source documents that validate the claims that Herbicide Orange was shipped to or through, unloaded, stored, used or buried on Okinawa,” Wright said by email.

Additionally, Genevieve Billia, VA public affairs specialist, said, “This BVA decision was case-specific, giving the benefit of doubt to the veteran claimant, and has no impact on Dr. Young’s report.”

Billia apparently ruled out the possibility of the decision opening the floodgates to similar payouts by explaining that such rulings do not set a precedent for other cases.

However, Don Schneider, a former military veterinary technician who believes he was exposed to defoliants on Okinawa in 1968, the same year as the marine in the latest case, is hopeful the ruling will make a difference.

“This will hearten and encourage other veterans to resubmit their claims for consideration. The VA has continued to ignore other valid claims but I think this decision will eventually prove to be as meaningful for the people of Okinawa as it is for the veterans who served on the island during the Vietnam War era,” Schneider told The Japan Times.

During the Vietnam War, Kadena Air Base — the installation cited in the October ruling as the location of the Agent Orange warehouse — was one of the Pentagon’s primary launchpads for the conflict. A 1971 U.S. Army report on Agent Orange — revealed by The Japan Times last year (‘71 Pentagon paper says Agent Orange was stored on Kadena Air Base,” Jan. 12, 2013) — cited a herbicide stockpile at Kadena, and it has been reported that the C-123 airplanes that sprayed defoliants over Vietnam were sent to the base for maintenance.

Recently, the installation has been the focus of public health fears following the discovery of 83 barrels — some stenciled with markings identifying the Dow Chemical Co., a defoliant maker — on land that was formerly part of the base. Tests on 22 of the barrels revealed some of them contained high levels of herbicide and dioxin, leading some scientists to assert that they may have contained military defoliants.

The results of tests on the remaining 61 barrels are expected to be made public in mid-April.

Meanwhile, last month, Kadena Air Base officials gave the all-clear to two Defense Department schools adjacent to the dump site following environmental tests on the surface soil of their grounds.