Bringing the Plight of Fukushima Children to the UN, Washington and the World

Aileen Mioko Smith of Green Action Kyoto speaks with Mark Selden in New York about recent developments in Fukushima and the US tour by anti-nuclear activists from Fukushima and other parts of Japan.

“75% of Fukushima’s 300,000 children are going to schools that are so contaminated they would be radiation control areas in nuclear plants where individuals under 18 are not legally allowed. The Japanese government won’t evacuate people unless radiation levels are four times what triggered evacuation in Chernobyl,” Aileen Mioko Smith pointed out.

The Fukushima earthquake tsunami nuclear power meltdown of March 11 opened the way for a far-reaching debate in Japan, the US and globally that could lead to rethinking the risks of radiation, the viability of nuclear power, and even to its elimination in some countries.

When UN Secretary-General Ban Ki-moon announced that the UN would convene a high-level meeting on nuclear energy and security, Aileen Mioko Smith was meeting in Hokkaido with Izumi Kaori of Stop Tomari, the citizens group campaigning to prevent reopening of the dangerous nuclear power plant. They decided on the spot:

Together with organic farmers Sato Sachiko of Fukushima and her two children, Anzai Sachiko, an organic farmer near Tomari, and Kevin Kamps, radioactive waste specialist at Beyond Nuclear who visited Fukushima, they have carried the urgent message that nuclear power plants must be closed in light of the disasters from Three Mile Island, Chernobyl and Fukushima. And that the Fukushima disaster presents an extraordinary opportunity to halt nuclear power not only in Germany and Italy where governments have taken prompt action, but in Japan, the United States and elsewhere.

Arriving in Washington on the six month anniversary of the March 11 Fukushima Daiichi meltdown, they have addressed the National Press Club, the US Nuclear Regulatory Commission, and the United Nations Human Rights Commission, as well as participating in an action at the Indian Point Nuclear Power Plant just 38 miles north of New York City. Their central messages to the American and to the Japanese people:

• Save the children of Fukushima and Northeast Japan
• End nuclear power everywhere drawing on the lessons of Three Mile Island, Chernobyl and Fukushima
• Asylum for Fukushima refugees: help both in Japan and abroad.
• UN stop promoting nuclear power.

Given American and global concern about the Fukushima disaster and the future of nuclear power, they were able to gain attention in Washington. Media ranging from CNN as well as NHK and Kyodo News of Japan carried the messages they delivered first to the National Press Club and subsequently to the Nuclear Regulatory Commission where they also received briefings on nuclear safety. The latter was particularly important since the NRC had called on all US citizens living within 50 miles (80 kilometers) of the Fukushima Daiichi nuclear power plant to leave. The Japanese government concerned about the costs of evacuating Fukushima city limited its evacuation to 20 kilometers with only additional evacuation of areas with expected annual dose of radiation of 20 millisievert or higher, including some hot spots outside that limit . In Chernobyl, citizens living in areas contaminated between 1 and 5 mSv/year received government aid if they wished to resettle.

Precisely the cavalier attitude of the Japanese government, above all its decision to risk the health of infants and children by limiting evacuation to 20 kilometers, has led campaigners to call for learning from the people of Fukushima, not the Japanese government. And its corollary, pointedly expressed by organic farmer Sato Sachiko: “the lesson is that once it happens, it’s too big for anyone to deal with. The only solution is to prevent it from happening by closing nuclear power plants.” In August, the Fukushima Network for Saving Children from Radiation, Green Action and four other Japanese NGOs submitted a report to the UN Office of the High Commissioner for Human Rights describing the Japanese government’s violation of the human rights of Fukushima children and urging the UN come to Japan to investigate the situation. 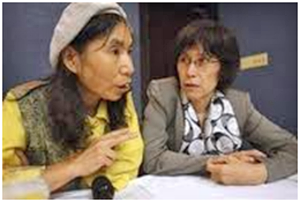 In New York City they carried their message to the United Nations and demonstrated in Dag Hammerskjold Plaza. As Japan’s Prime Minister Noda Yoshihiko emerged from his speech on nuclear safety and security, where he stated his expectation that Japan would complete cold shutdown of all the reactors that continue to spew radiation into the air and sea, Sato Sachiko, who was addressing a rally outside shouted: “Save the children! You must not lie to the world about things getting better. How can you talk about safe nuclear power when the Japanese government can’t even protect the children of Fukushima!”

The group’s next stop was the Indian Point Nuclear Power Plant just 36 miles from New York City. “When we met with US officials,” Ms Sato commented, “they said they would learn from the lessons of Fukushima. They talked about taking necessary measures out to 50 miles in the event of disaster. But now that I’ve been here, I realize that there is no possible evacuation plan for the 20 million people within 50 miles of the Indian Point plant.

As the Japanese delegates pointed out, the most urgent issue concerns the 300,000 children of Fukushima, above all those living in radiation hot spots both in Fukushima and beyond. The heart of the matter is the Japanese government’s evacuation policy. Following the meltdown, Japan established a twenty-kilometer evacuation zone from the plant, evacuating approximately 36,000 people out of Fukushima’s total population of just over 2 million. Including those who evacuated within the prefecture but outside the twenty kilometer zone, the number is still only a little larger than ten percent of the 400,000 plus evacuated from Chernobyl after the 1986 disaster which turned 2,000 villages into ghost towns. [See Fujioka Atsushi, Understanding the Ongoing Nuclear Disaster in Fukushima: A “Two-Headed Dragon” Descends into the Earth’s Biosphere.]

To minimize the number of evacuees, the Japanese government arbitrarily raised the permissible level of annual radiation exposure from one millisievert to twenty mSv, a figure that is being applied not only to adults but to infants and pregnant women, those most vulnerable to radiation. By contrast, following Chernobyl, the Russian and Belorussian states evacuated everyone in localities with five mSv. A quarter of a century later, the evacuated areas remain uninhabitable, a prospect that could confront Fukushima if recent official projections prove accurate.

How high a radiation level is twenty mSv/year? The Japanese government has legally compensated Japanese nuclear power plant workers who contracted cancer from as low as 5.2mSv exposure and higher. Now a substantially higher level of supposed safety (20 mSv) is to be applied to citizens, including infants and children in Japan. Indeed, the Japanese Ministry of Education (MEXT), choosing a strategy of reassurance over one of protection, produced a guide for teachers and parents in Fukushima which claimed that “weak” radiation doses such as 250 mSv over a number of years will have no health effects, and increased cancer risk was not recognized with cumulative doses of under 100 mSv. [Say Peace Project, “Protecting Children Against Radiation: Japanese Citizens Take Radiation Protection into Their Own Hands.”]

Much of the discussion of the risk of radiation has centered on cancer. That is indeed an important concern. But the effects of cancer are played out over decades and it is frequently difficult to conclusively pinpoint the cause. What have been the short-term health effects of the Fukushima Daiichi meltdowns?

“With the Japanese government in general, and the Fukushima medical establishment in particular providing no comprehensive statistical health data, indeed, insisting that there are no health concerns, it is presently necessary to rely on evidence provided by Fukushima residents,” Smith explains. “These include numerous examples provided by parents who have challenged MEXT and Fukushima authorities demanding evacuation for the children. For example, there have been numerous reports of serious nose bleeding and of diarrhea that cannot be stopped . . . and not just in children. There have also been numerous examples of symptoms of atopic skin diseases and asthma getting worse after the accident.”

We know, moreover, that the immediate effects of the Chernobyl disaster included elevated levels of numerous diseases including heart disease as well as birth normalities and stillbirths. [See introduction to Chris Busby, “Fukushima Children at Risk of Heart Disease.”]

While the people of Fukushima and Japan’s Northeast face serious problems of health, evacuation, and long-term economic disaster, the potential for positive change in the wake of the multiple disasters and especially the Fukushima meltdown now exists. Today just 11 of Japan’s nuclear power plants are operating and those that are closed require stress tests before they can reopen. [Note: Following the interview, one more plant was closed pending testing. This presently leaves just 10 in operation.] Since March 11 just one of the closed plants, the dangerous plant at Tomari in Hokkaido has reopened, and it is the subject of an active campaign to Stop Tomari.

Most important, the entire public dialogue has shifted with growing criticism of nuclear power and support for rapid development of renewable energy in the wake of passage of a renewable energy law which establishes a Feed-in Tariff system requiring power companies to purchase locally produced energy. Moreover, Japanese capital, led by businessman Son Masayoshi, has awakened to the potential of renewable energy as the next major frontier for Japanese industry. Finally, the fact that Japan succeeded in conserving energy to avert a serious power shortage with the majority of its nuclear plants closed makes clear the possibility for moving beyond nuclear power to renewable energy in future.

Aileen Mioko Smith, Executive Director, Green Action based in Kyoto, has been working to eliminate Japan’s nuclear power reactors since 1983. See this link for updates on the Fukushima Nuclear Power Plant earthquake and tsunami crisis. This interview was conducted in New York City on September 24, 2011. Smith is co-author with W. Eugene Smith of Minamata: Words and Photographs.

Mark Selden is a coordinator of The Asia-Pacific Journal.

Recommended citation: Aileen Mioko Smith and Mark Selden, ‘Bringing the Plight of Fukushima Children to the UN, Washington and the World,’ The Asia-Pacific Journal Vol 9, Issue 41 No 4, October 10, 2011.