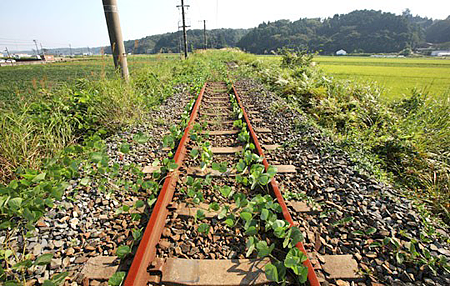 Wasteland: Weeds cover a rail line near the edge of the 20-km exclusion zone around the Fukushima No. 1 plant Sept. 9. BLOOMBERG PHOTO

Takako Harada, 80, returned to an evacuated area of Iitate, a village in Fukushima Prefecture, to retrieve her car. Beside her house is an empty cattle pen, the 100 cows slaughtered on government orders after radiation from the March 11 atomic disaster saturated the area, forcing 160,000 people to move away and leaving some places uninhabitable for two decades or more.

„Older folks want to return, but the young worry about radiation,“ said Harada, whose family ran the farm for 40 years. „I want to farm, but will we be able to sell anything?“

What is emerging six months since the nuclear meltdowns at the Tokyo Electric Power Co. plant is a radioactive zone bigger than that left by the 1945 atomic bombings at Hiroshima and Nagasaki.

While nature reclaims the 20-km no-go zone, Fukushima’s ¥240 billion a year farm industry is being devastated and tourists that hiked the prefecture’s mountains and surfed off its beaches have all but vanished.

The March earthquake and tsunami that caused the nuclear crisis and left almost 20,000 people dead or missing may cost ¥17 trillion, hindering the economic recovery from two decades of stagnation.

A government panel investigating Tepco’s finances estimated the cost of compensation to people affected by the nuclear disaster will exceed ¥4 trillion.

The bulk of radioactive contamination cuts a 5- to 10-km-wide swath of land running as far as 30 km northwest of the nuclear plant, surveys of radiation hot spots by the science ministry show. The government extended evacuations beyond the 20-km zone in April to cover this corridor, which includes parts of Iitate.

No formal evacuation zone was set up in Hiroshima after the U.S. dropped an atomic bomb on the city on Aug. 6, 1945, though as the city rebuilt relatively few people lived within 1 km of the hypocenter, according to the Hiroshima Atomic Bomb Museum. Food shortages forced a partial evacuation of the city in summer 1946.

On April 26, 1986, an explosion at the Chernobyl reactor hurled 180 metric tons of nuclear fuel into the atmosphere, creating the world’s first exclusion zone of 30 km around a nuclear plant. A quarter of a century later, the zone is still classed as uninhabitable. About 300 residents have returned despite government restrictions.

The government last week said some restrictions may be lifted in outlying areas of the evacuation zone in Fukushima, which translates from Japanese as „Lucky Isle.“ Residents seeking answers on which areas are safe complain of mixed messages.

„There are no simple solutions,“ Timothy Mousseau, a professor of biological sciences at the University of South Carolina, said. Deciding whether life should go on in radiation tainted areas is a „question of acceptable risks and trade-offs.“

To Mousseau, one thing is clear.

„There will be consequences for some of the people who are exposed to levels that are being reported from the Fukushima Prefecture,“ Mousseau said by email from Chernobyl, where he is studying radiation effects.

Japan abandoned any ambition to develop atomic weapons after the 1945 bombings. Two decades later, the nation embraced nuclear power to rebuild the economy after the war in the absence of domestic oil and gas supplies.

Tepco’s decision in the 1960s to name its atomic plant Fukushima No. 1 has today associated a prefecture of about 2 million people that’s almost half the size of Belgium with radiation contamination. In contrast, Chernobyl is the name of a small town near the namesake plant in what today is Ukraine.

The entire prefecture has been stained because of the link, according to Gov. Yuhei Sato.

„At Fukushima airport you don’t see Chinese and Korean visitors like before because of negative associations,“ he said.

The fear of radiation was prevalent after the Hiroshima and Nagasaki bombings and it stigmatized the hibakusha, the survivors exposed to radiation. Many hibakusha concealed their past for fear of discrimination that would prevent them finding work or marriage partners, according to the Japan Confederation of A-and H-bomb Sufferers Organization.

An examination of more than 77,000 first-generation children in Hiroshima and Nagasaki after the bombings found no evidence of mutations, he said.

While radiation readings are lower in Fukushima than Hiroshima, Abel Gonzales, the vice chairman of the International Commission on Radiological Protection, said similar prejudices may emerge.

„Stigma. I have the feeling that in Fukushima this will be a very big problem,“ Gonzales said during a symposium held in the city of Fukushima on the six-month anniversary of the disaster.

Some children who fled Fukushima are finding out what Gonzales means.

Produce from Fukushima’s rich soil is also being shunned. Peaches, the prefecture’s biggest agricultural product after rice, have halved in price this year. Beef shipments from the prefecture were temporarily suspended and contamination concerns stopped the town of Minamisoma from planting rice, according to local authorities.

Some land around the Fukushima reactors will lie fallow for two decades or more before radiation levels fall below the government’s criteria for evacuation, officials said Aug. 26.

Radiation risks in the 20-km zone forced the evacuation of about 8 percent, or 160,000, of some 2 million people who live in Fukushima. Almost 56,000 were sent to areas outside Fukushima, prefecture spokesman Masato Abe said. More than 8,000 left on their own accord because of radiation fears, Abe said.

Inside the evacuation areas, levels of radiation higher than the government’s criteria for evacuation have been recorded at 89 of 210 monitoring posts. At 24 of the sites, the reading was higher than the level at which the International Atomic Energy Agency says increases the risk of cancer.

He estimates the no-go zone in Fukushima will cover 132 sq. km, surrounded by a permanent monitoring area of 264 sq. km, assuming Japan follows the criteria set by the Soviet Union in 1986.

The two areas combined equal about half the size of the five boroughs that comprise New York City. In the case of Chernobyl, the two zones cover a land mass 25 times greater, according to Homma’s figures.

While scientists knew back in March that radiation contamination would create an uninhabitable zone in Fukushima, information to the public has come intermittently, said Hiroaki Koide, a nuclear physics scientist at Kyoto University.

„Many people in Fukushima have to face the reality that they can’t go back to their homes for decades,“ Koide said.

Masaki Otsuka said it may be worse than that.

„I don’t think I can ever go back to my house, because it was just 4 km from the No. 1 reactors,“ the 51-year-old pipe welder said in an interview at an evacuation center in the Azuma district in the city of Fukushima, where he has lived for six months.

People’s distrust of politicians and scientists, as well as conflicting commentary, makes it harder for residents to decide whether to stay or leave, said Michiaki Kai, a professor in environmental health science at Oita University of Nursing and Health Sciences.

Similar circumstances affected residents near Chernobyl and those close to the nuclear accident at Three Mile Island in Pennsylvania in 1979.

„Contradiction in some official statements, and the appearance of nonscientifically based ‘expert’ voices, confused and added stress to the local populations in each case,“ said Evelyn Bromet, a distinguished professor in the department of psychiatry at State University of New York, Stony Brook.

„Lies got told, contradictions got told. In the end it’s easier to believe nobody,“ Bromet said in an interview, citing mental health studies she did on people in the areas.

The coastal town of Minamisoma this year canceled its annual qualifying stage for the world surfing championship, part of a waterfront that lured 84,000 beachgoers in July and August last year, said Hiroshi Tadano, head of the town’s economic division. This year, nobody visited the beaches in the two months.

„Most of the beaches are destroyed,“ Tadano said. „And of course, radiation played its part.“

The area’s biggest festival, Soma Nomaoi, a re-enactment of samurai battles, attracted 200,000 visitors last year. This year 37,000 came. Of the 300 horses typically used in the event, 100 were drowned in the tsunami and another 100 were evacuated due to radiation, Tajino said.

Minamisoma resident Miyaguchi, 54, lost his home and parents in the tsunami. He quit his job at Tepco, leaving him unemployed and housed in an evacuation center.

Still, he has no plans to move away. „Most people who wanted to move away have done so, but I can’t live in big cities like Tokyo,“ he said, declining to give his first name.

The future of Fukushima is in the hands of residents like Miyaguchi and Harada who say they want to stay and work to reclaim their land from disaster.

A giant banner in the playground of the closed Haramachi Elementary School in Minamisoma makes that a promise: „To all of you wherever you are, we say we won’t give up.“