As the Seoul International Aerospace & Defense Exhibition 2013 (hereafter, "Seoul ADEX 2013") started from 28th Oct, 22 civil society organizations in South Korea engaged in a series of actions targeting the largest arms fair in the Asia-Pacific region. The coalition organized an alternative exhibition of their own in response to the Seoul ADEX 2013 and named it the Peace and Disarmament Exhibition. While Seoul ADEX 2013 focused on new technology or advancement of weapon systems, the Peace and Disarmament Exhibition put emphasis on the inevitable consequences of arms trade and tried to unveil the naked face of the arms fair.

On a pathway leading to Seoul ADEX site, campaigners installed 40 pieces of panels covering critical issues. Some of the key issues covered at this alternative exhibition were horrific consequences of use of drones and cluster munitions. Activists also distributed "Guide Leaflets for ADEX Visitors" to passing by citizens in order to reveal the true nature of the Seoul ADEX. The organizations also challenged the government policy to foster arms industry and called for a full review of its arms export policy and tougher regulations throughout the material published.

In parallel to the exhibition, activists also engaged in a series of nonviolent direct actions. On 28th Oct, activist appeared as the Death and 'welcomed' the merchants of death as they were coming into the hotel for a Seoul ADEX 2013 Welcome Reception holding a big banner that says "Arms Dealers here today. This is not OK". During the business session of Seoul ADEX, some activists 'invaded' ADEX site wearing T-shirt that says "How many people can it Kill?" and handed out blood money to the arms dealers. Some posed as victims of drones exhibited in Seoul ADEX and held signs calling for an end to the production, use and transfer of drones.

Below is the joint statement issued by 22 organizations on the first day of Seoul ADEX 2013. [Statement issued at a Joint Press Conference for the 4th Peace and Disarmament Exhibition] 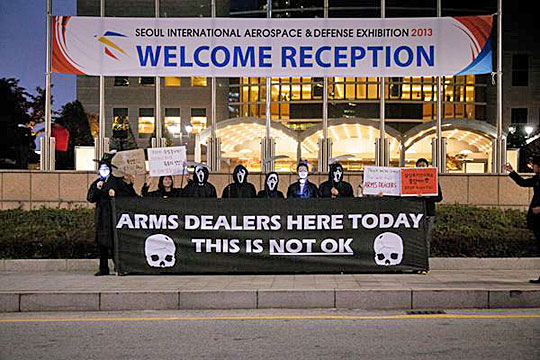 Today, we stand here to voice our opposition against the Seoul International Aerospace & Defense Exhibition 2013 (hereafter, "Seoul ADEX 2013"), which aims to facilitate arms trade and to foster the defense industry. Even at this very moment, countless people are being killed by arms in various conflict zones. We condemn South Korean government for hosting this large-scaled defense exhibition which costs tens of billion won while turning a blind eye to conflicts, killing of people and the vicious circle of arms race which are the inevitable consequences of arms trade. Also, we wish to convey our voice of concern over the government policy to foster defense industry as a national strategic industry and an export oriented industry.

We take note of the fact that the arms fair, which is sugar-coated with the names such as advanced technology and export industry, is in reality facilitating production, development and trade of various kinds of fatal and precise killing machines. The expressions such as "better performance" and "various kinds of weapon system" can be interpreted as "killing much more people within much lesser time" and "various kinds of killing and destruction methods". Despite the advancement in technologies, civilian casualties by arms are increasing more and more; the issue of dehumanization as a result of remotely controlled weapons is getting more serious than ever. Horrific killings are happening around the globe; people are killing another human being without feeling any guilt as if they were playing videogames. For last decade, over 3,000 civilians including women, elderly and children were killed by drone or Unmanned Combat Aerial Vehicle in Pakistan and Yemen alone.

In addition, concern over development and use of autonomous robotic weapons which destruct or kill the target autonomously without human intervention is growing within international society. In last April, UN Human Rights Council published a report which expressed concern over development and use of Lethal Autonomous Robotics (hereafter, "LARs"), the so called "killer robot". The Council made recommendations to producing states of autonomous or semi-autonomous weapons including South Korea to introduce a moratorium on at least the testing, production, assembly and use of LARs until further guidelines are established. South Korea is deploying surveillance robot developed by Samsung Techwin into the De-militarized Zone. This robot is designed to be controlled by human in remote distance, but has "autonomous mode" which puts the robot under the category of "a killer robot".

Nevertheless, South Korean government is irresponsibly fostering and funding arms industry without giving due consideration to inhumane nature of weapons, the issue of dehumanization or aggravation of conflict by arms exported to conflict zones. As it is known generally, former administrations had been fostering defense industry as national strategic industry and export oriented industry, and Park Geun-hye administration is also stressing that defense industry should become the core driving force of the Creative Economy and the administration is actively encouraging investment to the industry. The government policy to foster arms industry as core national export industry at the expense of someone's life cannot be deemed as morally desirable. Moreover, among the countries which South Korean arms are exported to, there are states such as Turkey, Indonesia, UAE, Saudi Arabia, Pakistan and Israel that are in the midst of conflict or oppress ethnic minorities. The arms which were produced and exported in pursuit of economic gain are being used for killing or threatening the lives of others. Arms industry cannot be treated equally as to other export industries. On the contrary, it should be thoroughly regulated under the robust standards. South Korean government should review its policy to encourage arms export, and introduce regulations is accordance with the principle of peace enshrined in the Constitution and with international human rights standards.

In addition, the Peace and Disarmament Exhibition express its grave concern over the government policy justifying the fostering of arms industry and arms buildups, and spreading culture of militarism across the whole society. Recently, government and military authorities are strengthening and expanding security education which can amount to paramilitary training under the name of national security. Military camps which teach how to handle lethal weapons and arouse hostility are prevailing under the name of education. We have serious question that what kind of help can it provide for whole-person growth of students and peace of our society. We wish to challenge the social atmosphere which lets people to take their children to arms fair without having any doubts and promotes arms industry. What we should teach our children is not cheerful welcome of advanced weapon systems but a peace sensitivity which lets us to face the reality that there are real victims of the very weapons we hold; and not a security education but a peace education.

For last six decades, military tension and conflict around the Korean peninsula had been used as a government pretext for fostering of arms industry and arms buildups. Recently, we are experiencing unprecedented military tension and facing more strengthened militarism and division under the banner of the ideologies from the Cold War era. However, our history teaches us that the conflict and tensed relation can never be resolved with military means. Therefore, we actively oppose to arms development, massive arms acquisition program and arms buildup under the name of "national security", and we call for the hostile political, military relation to be replaced with peaceful cooperative relation in prioritization of 'security' and peace of the citizens which had been put aside long enough.

------------------------------
This newsletter is published by Peace Network, a peace movement organization located in Seoul, Korea. Our Movement is dedicated to realizing active peace by promoting anti-war, anti-nuclear, disarmament, and unification of the Korean Peninsula.