On March 1, 2007, Japan’s Prime Minister Abe Shinzo denied the comfort women. Technically, Abe denied Japanese governmental responsibility for the forced coercion of women and girls into the system of sexual slavery that involved an estimated 80,000 to 200,000 victims from throughout Asia, particularly Korea and China. Looked at in starkest relief, the democratically elected leader of the world’s second richest nation one that currently aspires to international leadership in the UN Security Council committed an act of open violence. He denied the few remaining survivors of a well-documented history the right to claim the dignity that has come as a result of telling their story since 1993 when the Government of Japan first publicly accepted responsibility.

Since last September, many have predicted that Abe would do something along these lines because of his track record prior to committing to the contours of the so-called “Kono Statement” which has provided the baseline terminology for Japan’s official acceptance of this history throughout the last thirteen years. Over the coming weeks, pundits of all stripes will explain why Abe chose now to make his move. Is it because the U.S. Congress is currently deliberating a resolution calling on Japan to formally apologize for this history, thereby pushing Japan into the hands of the right? Is it because Abe is so personally committed to constitutional revision that, despite rapidly plummeting polls, he will do anything to stay in power through the July elections to secure this possibility? If he wants to emulate the actions of his grandfather, Prime Minister Kishi Nobusuke, in bringing about the 1960 Revised Security Treaty with the United States, then mollifying his party's sizeable revisionist wing was perhaps inevitable. Whatever deep-level motivations informed Abe’s timing, he must have knowingly picked March 1st to make his pronouncement: Koreans commemorate the mass anti-Japanese protests on that day in 1919 during the colonial era.

If Abe has his way, what will be lost yet again, as it was in the half century of silence that followed the Pacific War, is the women themselves. Never mind how many times they have had to tell their deeply painful stories in public to gain credibility. Never mind how many times they have had to lift their shirts in public to show the scar of a breast lopped off by an angry Japanese soldier during a rape over half a century ago, or to show a gash across their stomach where an Army doctor cut out an unborn child. Never mind those who went to their grave in silence. Japan’s leaders are clear: these women and their histories are disposable

The day after Abe' statement, even the usually pro-Japanese South Korean paper, The Chosun Ilbo, captured all this in its editorial cartoon below. Alexis Dudden. 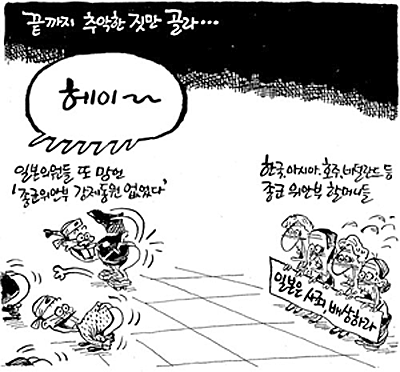 "There was no forced coercion of comfort women,” Japanese parliamentarians scream, “Hey!!!” and moon four former comfort women representing Korea, Asia, Australia, and the Netherlands who are holding a sign reading, “Japan Should Apologize and Pay Reparations!”

TOKYO - Japan's nationalist prime minister denied on March 1 that the country's military forced women into sexual slavery during World War II, casting doubt on a past government apology and jeopardizing a fragile detente with his Asian neighbors.

The comments by Abe Shinzo, a member of a group of lawmakers pushing to roll back a 1993 apology to the sex slaves, were his clearest statement as prime minister on military brothels known in Japan as “comfort stations.''

Historians say some 200,000 women - mostly from Korea and China - served in the Japanese military brothels throughout Asia in the 1930s and 1940s. Many victims say they were kidnapped and forced into sexual slavery by Japanese troops.

But Abe, who since taking office in September has promoted patriotism in Japan's schools and a more assertive foreign policy, told reporters there was no proof the women were forced into prostitution.

“The fact is, there is no evidence to prove there was coercion,'' Abe said. 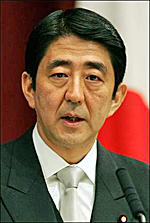 His remarks contradicted evidence in Japanese documents unearthed in 1992 that historians said showed military authorities had a direct role in working with contractors to forcibly procure women for the brothels.


The documents, which are backed up by accounts from soldiers and victims, said Japanese authorities set up the brothels in response to uncontrolled rape sprees by invading Japanese soldiers in East Asia. 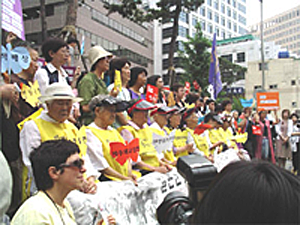 In 1993, then-Chief Cabinet Secretary Kono Yohei apologized to the victims of sex slavery, though the statement did not meet demands by former “comfort women'' that it be approved by parliament. Two years later, the government set up a compensation fund for victims, but it was based on private donations - not government money - and has been criticized as a way for the government to avoid owning up to the abuse.


The mandate for the fund is to expire March 31.

Abe's comments were certain to rile South Korea and China, which accuse Tokyo of failing to fully atone for wartime atrocities. Abe's government has been recently working to repair relations with Seoul and Beijing.

The statement came just hours after South Korean President Roh Moo-hyun marked a national holiday honoring the anniversary of a 1919 uprising against Japanese colonial rule by urging Tokyo to come clean about its past.

Roh also referred to hearings held by the U.S. House of Representatives last month on a resolution urging Japan to “apologize for and acknowledge'' the imperial army's use of sex slaves during the war.

“The testimony reiterated a message that no matter how hard the Japanese try to cover the whole sky with their hand, there is no way that the international community would condone the atrocities committed during Japanese colonial rule,'' Roh said.

Dozens of people also rallied outside the Japanese Embassy in Seoul to mark the anniversary, lining up dead dogs' heads on the ground with pieces of paper in their mouths listing names of Koreans who allegedly collaborated with the Japanese during its 1910-45 colonial rule. Protest organizers said the animals were slaughtered at a restaurant; dogs are regularly consumed as food in Korea.

Roh's office said late Thursday it did not immediately have a direct response to the Japanese leader's remarks. In Beijing, calls to the Chinese Foreign Ministry seeking comment on the remarks were not immediately returned.

State Department spokesman Sean McCormack would not comment on Abe's statement. “I'll let the Japanese political system deal with that,'' he said.

The sex slave question has been a cause celebre for nationalist politicians and scholars in Japan who claim the women were professional prostitutes and were not coerced into servitude by the military.

Before Abe spoke Thursday, a group of ruling Liberal Democratic Party lawmakers discussed their plans to push for an official revision of Kono's 1993 apology.

Nakayama Nariaki, chairman of the group of about 120 lawmakers, sought to play down the government's involvement in the brothels by saying it was similar to a school that hires a company to run its cafeteria.

“Some say it is useful to compare the brothels to college cafeterias run by private companies, who recruit their own staff, procure foodstuffs, and set prices,'' he said.

“Where there's demand, businesses crop up ... but to say women were forced by the Japanese military into service is off the mark,'' he said. “This issue must be reconsidered, based on truth ... for the sake of Japanese honor.''

Sex slave victims, however, say they still suffer wounds - physical and psychological - from the war.

Lee Yong-soo, 78, a South Korean who was interviewed during a recent trip to Tokyo, said she was 14 when Japanese soldiers took her from her home in 1944 to work as a sex slave in Taiwan. 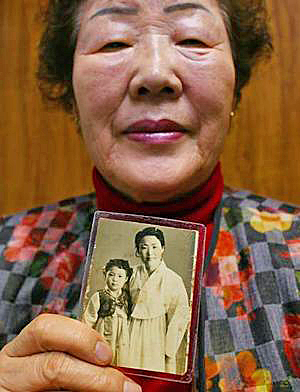 “The Japanese government must not run from its responsibilities,'' said Lee, who has long campaigned for Japanese compensation. ““I want them to apologize. To admit that they took me away, when I was a little girl, to be a sex slave. To admit that history.''

Kozo Mizoguchi wrote this article for the Associated Press on March 1, 2007. Alexis Dudden, who wrote the introduction, is associate professor of history at Connecticut College and a Japan Focus associate. She is the author of Japan's Colonization of Korea: Discourse and Power.

By Center for Research and Documentation on Japan’s War Responsibility. hier