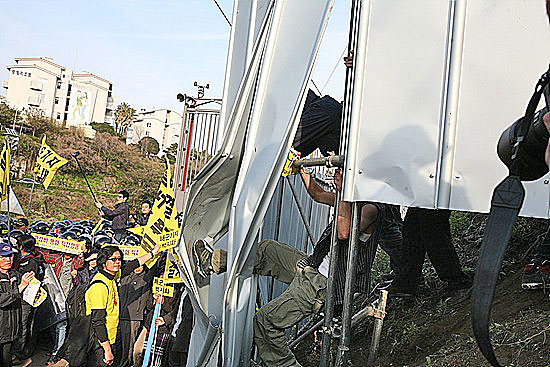 (Image source: Lee Seung-Rok, Jeju Sori)
On April 14, People broke a part of the fence surrounding the naval
base construction saying, 'Imprison 10,000 of us! Even though
you jail us from fear, we will be jailed with joy."
http://www.jejusori.net/news/articleView.html?idxno=114121

"The Spring of History comes not from elections but from jail (Baek Gi-Wan)." Despite the overall general election results on April 11, when the ruling party got a majority of the seats in the Korean National Assembly (ruling 157, opposition 127+15), the results on where remarkably different on Jeju Island as the people chose all opposition party members (Three elected and one female youth representative, all members of the Democratic United Party). This is a reflection of the Island people's choice against the Jeju naval base project being enforced by the central government. From this the people have renewed their will towards a positive vision and a more strong unity to push back against the central government and arms corporations such as Samsung. Despite a ruling which prohibits campaigns in the village from after the election until May 12th, the villagers have begun having a traveling candlelight vigil around Jeju Island. There was also the first reunion in five years between villagers who are both con and pro naval base. Additionally a new people's direct action group, willing to be jailed, was formed.

Meanwhile, national and international support has expanded through a new petition initiated by The National Association of Professors for Democratic Society (Petition was started on March 20), as well as the births of new solidarity groups in many countries such as Britain, Canada, France, Germany, Japan, and the United States. Additionally, the April 17th Global Day of Action on Military Spending helped confirm our struggle. That day was also a day to remember political prisoners. As of April 17, Dr. Song Kang-Ho, who was arrested on April 1, is still in prison. As of April 14, the total number of arrests since January 2010 has exceeded 442. The need to appeal for human rights is stronger than ever. It is also important to demand the elected opposition party members to work harder to revoke the Jeju naval base project.

11. April:
The opposition party (Democratic United) won the general election in all three constituencies in Jeju. All of them had a 'resolution to re-examine on the naval base project from the beginning point' as their pledge, and people from Jeju voted for that peaceful future. However, since the ruling party (Saenuri) maintained its majority in Korea as a whole, it's now hard to predict what's going to happen. In Seoul, a flash mob was held to express support for the Gangjeong villagers fighting the naval base. Some people held signs that read 'Pirate Samsung.'

12. April:
The day after the general election in which the ruling party won the majority of seats, the navy pushed construction ahead and causing a clash with the peace keepers. In total, 8 people were hauled to the police station. The 3rd hearing on the 'Public water surface reclamation work for the Construction of the Civilian-Military Complex Tourist Port' was conducted in private between the Jeju Island government and navy for about 3 hours. To the fury of the people who have continuously demanded that the Island governor promptly order the navy to halt the destruction, the governor's decision will be made in approx. 10 days. Otherwise, there was a court trial for 4 people (Mr. Hong Ki Ryong, Executive Chairman of the Pan-Island Committee for Prevention of Military Base and for Realization of Peace Island/ Mr. Go Yu Gi, policy planning officer of Democratic United Jeju chapter/ Mr. Kim Jong Il, former Secretary of Solidarity for Peace and Reunification of Korea (SPARK)/ and Ms. Kim Mi-Ryang, female villager) who were charged with the "Obstruction of Business" etc. The Prosecutor demanded a sentence of 1.5 years (first two) and 3 years (last two) imprisonment. The sentence will be passed on May 10.

13. April:
The Candle light vigil was held in the Jochun-eup, in the north eastern district of the Island, as a part of the effort to extend the struggle throughout the Island. Speakers included Shin Ku-Bum, former Island governor, Shin Yong-In, lawyer, and Kang Dong-Kyun, Gangjeong village mayor. They envisioned the revitalization of the struggle through unity, a spirit of resistance, and the dream for a true World Peace Island. On that same day, the new "Ocean Leisure Activity Forbidden Area Notice" by the Seogwipo Coast Guard went into effect and will last until Dec. 31, 2015. The police hope that this will greatly limit the seat protest activities of the Save Our Sea (SOS) team. Despite this, the SOS team held a sea campaign for several hours in the afternoon in Jochun-eup before joining the candle vigil in the evening. Otherwise, the Seogwipo Police Station sent a notice to the village association regarding the disallowance of rallies and marches in all key protest spots until May 12th, an implication that we will face another hard period of struggle.

14. April:
At 4 p.m., The 11th National Convergence Action Day Against the Naval Base was held. Approx. 1000 police blocked the road with 20 police buses and a water cannon truck, one peace activist was arrested for property damage and 11 direct action activists were arrested at the port under the charge of violation of the Law on Assembly and Demonstration. On that day, a declaration of 'Direct action for the Peace of the Gureombi Rock' was announced declaring, "Imprison 10,000 of us! Even though you jail us from fear, we will be jailed with joy...As the masters of this country, we have the right to enter the Gureombi Rock in peaceful way, The police walls cannot stop us...This is to save the value of Life and Peace...Mahatma Gandhi said, 'The mystery of the struggle is to go to prison and feel happiness in jail.'" Baek Ki-Wan said, "Let's all go to jail. The Spring of History comes not from elections but from jail." After the citizens action to break the fence a total of 12, including two women, were arrested. At 6 p.m., more than 500 people gathered and enjoyed a Gangjeong concert evening in the port. 100 peace wind lanterns were flown into the sky.

15. April:
Hosted by the Gangjeong Village Elders' Association (Chairman, Kim Jung-Min), a Sunday event was held in the village ceremonial hall to restore the village community which has been broken between those against and for the naval base project. The event was titled, "Reconciliation and Co-existence: Let's break out ripe wounds." This was a very meaningful event for all the villagers as it was the first time in five years to come together. Kim Jung-Min, chairman of the Elders' Association said, "The Gangjeong village community has been thoroughly broken because of the naval base issue since 2007. However there can be a way to solve our conflicts anytime if we have a will for harmony. Though it will not be easy to solve this conflict, we should not neglect, avoid, nor submit to the other side through force. The Gangjeong village community has to be recovered. The elders' association will play the role of providing an open space to bring understanding and communication and to heal wounds."

16. April:
After linking arms through PCV pipes in front of the explosives storage on March 19th, on April 16, a group of activists linked arms through metal pipes, to block cement trucks in front of the main construction gate. They managed to block the trucks for more than three hours. Unlike on March 19, when police used a hammer to break the pipes, this time they brought an air saw. The police used the saw for 30 minutes despite the cries and screams of the young female activists linking arms. Shocked and indignant, people stormed the police in protest. Fr. Mun Kyu-Hyeon fainted due to a brief cardiac episode. He was shortly hospitalized. 14 peace activists were arrested, including Fr. Lee Young Chan (who climbed on top of a cement mixer truck) and the activists who risked their safety linking arms through the metal pipes.

17. April:
April 17 was the 2nd annual Global Day of Action on Military Spending, as well as the Political Prisoners' Day, the difficult struggle continued. Two peace activists including Mr. Kim Jong-Il and Rev. Jeong Yeon-Gil were arrested while several Catholic Fathers who climbed on top and crawled underneath trucks were not. In other news, Fr. Mun Jeong-Hyeon was chosen as the winner of the Gwangju Human Rights Award. It is for the first time that the award was given to a Korean individual since its establishment of it by the May 18 Memorial Foundation in 2000.

18. April:
The People's Solidarity for participatory Democracy (PSPD) sent individual communication to the UN Special Rapporteur on Freedom of Opinion and Expression, Special Rapporteur on Human Rights Defenders and Special Rapporteur on Freedom of Peaceful Assembly and Association, regarding human rights violations in Gangjeong. They sent cases including the cases of Mr. Kang Dong-Kyun (village mayor), Dr. Song Kang-Ho, Fr. Mun Jeong-Hyeon, and Mr. Yang Yoon-Mo. Otherwise, the Gangjeong Village Association was chosen as the winner of "April Revolution Award" that will be given on the 52nd anniversary of 4.19 Revolution. The village will be also awarded the "Neutbom Unification Award," in commemoration of the deceased Reverend and peace activist, Moon Ik-Hwan on April 19. The April Revolution Foundation said, "The Gangjeong Village Association, started from the committee to stop the naval base in May 2007, has heartbreakingly fought to save the heaven-blessed nature which is also an absolute conservation area. Their issue has merged with all Korean people's concerns for saving peace and nature."

Take Action:
1. Please take some time to write protest letters to the government and the naval base planners and contractors, demanding the annulment of the Jeju naval base project, and stopping construction (destruction) including the blasting of the Gureombi Rock and human rights violations. Please remind them that the central government and government–affiliated corporations such as Samsung and Daelim should not oppress the Island people with their naval base business project, which is the reminiscent of a 2nd 4. 3.
Appropriate addresses can be found here:
https://app.e2ma.net/app/view:CampaignPublic/id:33867.7483820829/rid:c5c744865a7b372e77e36ea5fb216220
http://www.secc.co.kr/eng/html/customer/contactus.asp (Samsung C & T)

2. Please write a letter to Woo Keun-Min, Island governor, to stop the 2nd 4.3, to order the halt of the construction; to revoke the navy license for reclamation of the coast and sea in the base project area; and to restore the absolute preservation area that was annulled for the naval base project through undemocratic procedures in 2009. Also please demand that he give a sincere apology to the people attacked on the night of March 26th when he mobilized the government officers to suppress the people's sit-in.
These actions will really help to stop the on-going destruction being caused by the naval base project!
Mr. Woo Keun-Min, Jeju Island Governor: kmj5369@jeju.go.kr or jejumaster@jeju.go.kr

For more immediate situation updates, join the facebook group, 'No Naval Base on Jeju'.

Thank you,
The Extended International Team of Gangjeong Village
April 18, 2012