Worker's exposure:
Caissons for the Jeju naval base project are unreliably built
The base layout on the breakwater is critically short of necessary sea wave height design. 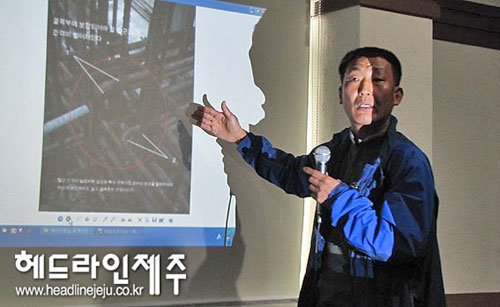 Photo: Headline Jeju
A worker, Ryu Yoon-Sun exposes on the problems in the caisson production in Hwasoon.

It was on May 12, 2012 that the Jeju Sori first reported about unidentified informant's words and visual proofs about unreliable caisson production in Hwasoon. The village made a statement on it on May 22. See the statement and summary of the Jeju sori article, here.

In the press conference on Oct. 30, 2012, the people including the Gangjeong Village Association raised on the matter of unreliable caisson construction again along with the matter of the breakwater design.

Remarkably, a former caisson worker testified on the unreliable caisson production in Hwasoon port on the day. On the same day, the superintendent committee of the naval base project soon made a refuting statement saying that "the claim on the unreliable caisson production is false and distorted." However, the next day of Oct. 31, the village association made a statement again proving that the superintendent committee's asserts are totally wrong. You can see the village association's statement in Korean here. The below is the summary translation of Jeju media articles regarding the press conference on Oct. 30.

A worker exposes on the unreliable caisson production

On the day's conference, Mr. Ryu Yoon-Sun(45), a former worker in the caisson production site in the Hwasoon port, Andeok-myon, Jeju, testified on the matters on unreliable production of caissons. The work site, under the supervision of Samsung C & T, is producing 8,800 ton caissons that would be used for the frame of the breakwater in the 1st work area of the Jeju naval base project. The total caissons that would be produced there are 57 and each costs 1.5 billion won.

Mr. Ryu with 30 years work career has been an employee of a construction company, a sub-contacted company of Samsung since last April. During his term of working at the Hwasoon caisson production site, he raised the problems of the caisson production process but was ignored. Since then he has taken photo records to secure the proofs. He left Hawsoon work site at the end of September.

Recently he visiting the Gangjeong village association along with other three workers, accused on the company's unreliable construction behavior.

The focal point of the workers is that the navy and contracted companies are carrying out unreliable construction to move up construction, shortening the caisson production period into a week, which usually takes 15 days.

According to him, a caisson divided of many rooms that would be filled with concrete is being designed without installation of reinforcing bars in the parts of 50 H-beams of which two H-beams are in each room working as column, which makes caisson weak to the outside shock. 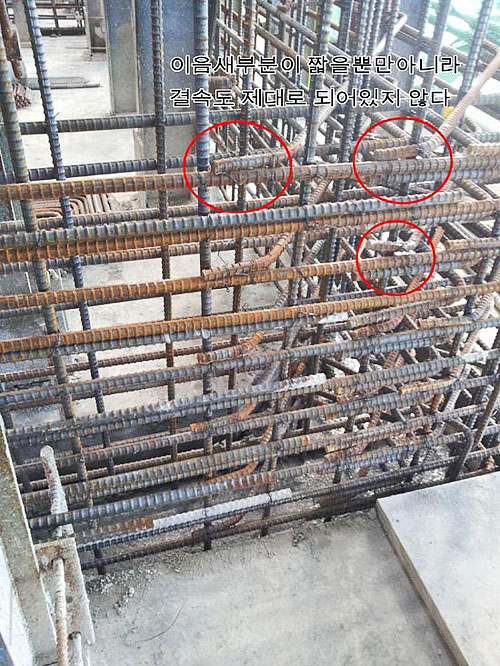 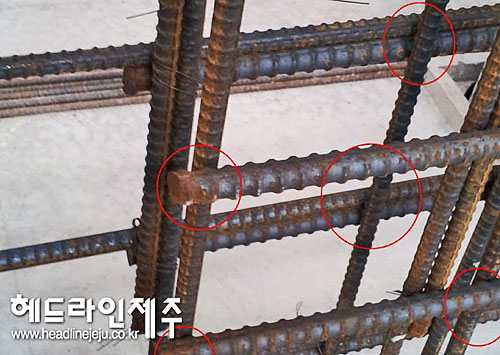 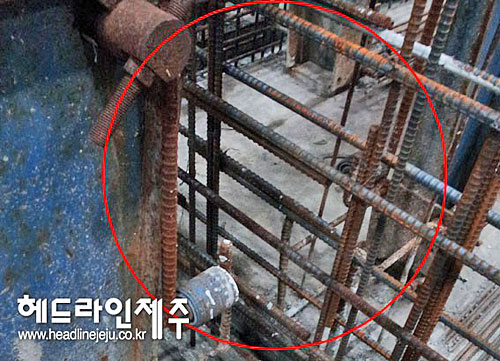 Also, even though it was designed that the gap between the reinforcing bars is to be 20cm, it is 50cm in reality. The space made for the workers' passage is not filed with reinforcing bars therefore it would be the first site to be cracked in concrete during the typhoons.

Regarding foreign workers, he said, "In case of reinforcing bar construction in caisson production, the workers are divided of two teams, working 12 hours each in shift. Since April 26, foreign workers were put in but they are not managed well because the numbers of Korean artificers are only 12 who are the chiefs of the teams. Most of the foreign workers are not artificers."

Ryu also explained that another reason of cracks in concrete is because the company, for the purpose of moving up construction, has reduced the putting numbers and amounts of retarding element when it is put into concrete.

"When you pour concrete, you should operate a tremor plate so that the density of concrete is heightened and there should be no bubbles. However, I saw myself that holes occurred like an osteoporosis diseased bone on the concrete plane after the concrete cure because the operations of tremor were not done enough."

"The 1st caisson was the least destroyed by the typhoon at the end of last August. That was the best made."

All the seven caissons that Samsung C & T have made were destroyed by the typhoon Bolaven at the end of August therefore new ones are being made again.

The Gangjeong village demanded that the Government punish the related personnel and the National Assembly cut the whole budget on the naval base construction in 2013.

The village raised on the matter on the navy's reduction of sea wave height in the harbor and bay layout.

The village reminded that the element of wave height in design is an important variable to predict the intensity of breakwater, fixed temperature of port, and mooring safety; that it is custom that setting the standard with the strongest wave height among the wave heights observed for last 20 years is custom, ; and that all the military ports in Korea have been designed to be equipped with the ability of prevention against inner side and cross-over sea waves, by setting up one design sea wave as standard.

According to the village association, it is only in the Jeju naval base project that the design sea wave has been set up by sections with lower size than 13.7m, the highest sea wave at the time of typhoon Bolvan.

The village stated that [the navy and navy-contracted companies] have designed reducing the design sea wave, concerning the over-excessive occurrence of construction cost."

According to the 'outer facility plan' in the report on the basic plan of the Jeju naval base, written in January 2010, it reads that 'the south breakwater has to be secured of construction and safety element at the time of sectional plan regarding the plane arrangement plan, and as it is expected that [the south breakwater] occupies 60~65 % of harbor and bay construction fee, construction, safety and economic element should be considered above all.'

Otherwise, Jang Hana, Jeju-born member of the National Assembly, Democratic United Party, also making public the inside accusation material on the unreliable naval base construction, criticized that 'it is not accidental that 7 caissons were destroyed by the typhoon Bolaven. And it turned out that it was an inevitable result that the Samsung C & T that has connived and backed unreliable construction brought on itself. "

Jang scolded that "Now in Gangjeong village, 24 hour restless construction is being processed so that the navy could advantageously get the approval on the budget by the National Assembly by raising construction rate. And the villagers and peacekeepers are taking sleep on the ground in front of the construction site. What is the difference between this unreliable construction and four river project by which many workers have died?"

Jang stated that she would carry the inspection on the caissons with the media reporters being present and would drive to take all the legal measures such as cancellation of business of the Samsung C & T and construction-supervising committee according to the law on technical management, if it turns out that there has been done unreliable construction.

Issues on foreign workers and wages.

Otherwise regarding the matter on employing foreign workers, it is interesting to read the statement by the naval base project superintendent committee. According to it, "Among the 180 Vietnamese workers working in Hwasoon, about 10 Vietnamese who are very well in Korean and 8 Vietnamese whose communication in Korean is possible are arranged in work site. There is no problem in the communication between the domestic and foreign workers since a team chief takes a role as a translator."

The superintendent committee also mentioned on the unpaid wages that Mr. Ryu Eun-Sun complained. The committee said that "there were no cases that the wages have been delayed even though there were loopholes during the tuning process between the section chief and workers." It also said about the wage system that wages were negotiated with workers for change and there was no unilateral change when the wage system was changed from the monthly to daily." The committee said that they would strongly take legal measure against Ryu.

However, the village stated on Oct. 31 that "When Mr. Ryu visited and talked with us, we witnessed in person that the company continuously called him and paid him three days' delayed wages among more days' through his bank account. Ryu also testified that not only him but most workers who quit the job experienced same. The three workers who came with Ryu also acknowledged it."