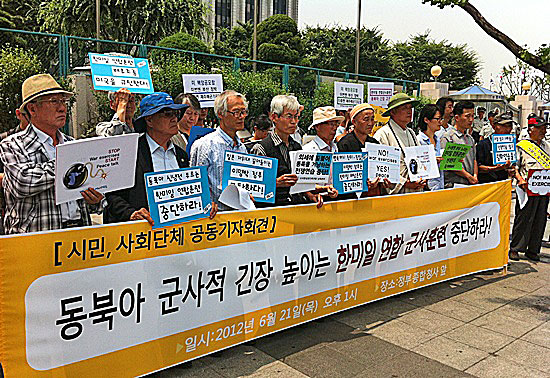 ROK-US-Japan trilateral war game is held FOR THE FIRST TIME in the Jeju Sea.
Even the USS nuclear-powered aircraft carrier is mobilized on June 22.
55 groups made a statement: No US-ROK-Japan war game!
Picketing was held in front of naval base construction gate, Jeju, too.

It is for the first time that the three countries of the ROK, US, Japan hold a joint maritime war drill in the southern sea area of the Jeju Island, which is from Thursday, June 21 to Friday, June 22. There will be ROK-US war exercise near the Pyeongtaek (where the strategic US bases locate), in the western sea area of the Korean peninsula, from June 23 to 25. The US nuclear aircraft carrier George Washington is told to join on June 22 and 23~25.

According to a Naeil news, June 14, the US Defense Department said on June 13 that, "Japan has participated as observer of the ROK-US military exercise in the adjoining seas of the Korean peninsula, [since 2008] but her FORMAL participation is FOR THE FIRST TIME, [IN JEJU] this year." The mobilization of the US aircraft carrier emphasizes the war game's offensive character, even though the war drill fakes that of search and rescue training and maritime interdiction form.

According to the Yonhap News on June 21:

'On Thursday, [June 21], North Korea's ruling party newspaper Rodong Sinmun denounced the three-nation exercise as a "reckless provocation." The dangerous moves to knock into shape the triangular military nexus is an act going against the trend of the times for regional peace and stability including the Korean Peninsula," it said. Dark clouds of a new war are thus hanging heavily in Northeast Asia including the peninsula," the newspaper said.'

Otherwise, 55 civic groups including the Gangjeong village association, Pan-Island and nationwide committee to stop the naval base, Peace Network, People's Solidarity for Participatory Democracy (PSPD) and Solidarity for Peace And Reunification of Korea (SPARK), Korea Alliance for Progressive Movement (KAPM) listed their group names in the joint statement read in people's press conference held in front of the Government Complex building at 1pm, June 21. About 20~25 people joined the conference. 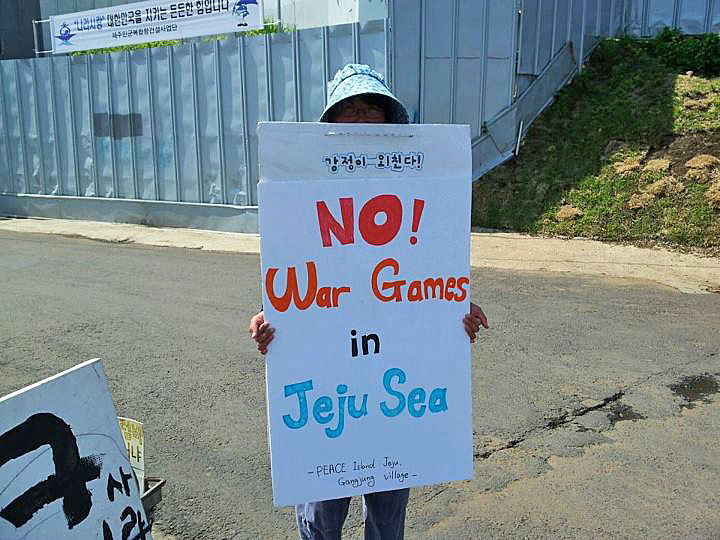 In the statement read, people stated: (*Sorry, only for summary now)

First, the three countries' joint war drill has been driven inside closed doors without social and public agreement. The Lee Myung-Bak government has been faced of strong public opposition when it attempted to drive the GSOMIA (General Security Of Military Information Agreement ) and ACSA (Acquisition and Cross-Servicing Agreement) with Japan last month.

Second, the maritime drill is not of a simply humanitarian character but of the offensive military training. The so called sea interception operation is a part of PSI (Proliferation Security Initiative) led by the US, which is in violation of the international law (articles of 17, 19, 23 and 87 of the United Nations Convention on the Law of the Sea (UNCLOS)

Third, the war drills including the ROK-US war drill on June 23~25 damage the peace and stability of the Korean peninsula and North East Asia. And it brings about military tension and conflict in the region. While the US mobilizes a carrier battle group of nuclear aircraft carrier and nuclear submarines, the South Korean navy mobilizes Aegis Destroyer, submarine for the anti-submarine drill in the west sea. It is a violation of the item 4 of the article 2 of the UN charter that reads, "All Members shall refrain in their international relations from the threat or use of force against the territorial integrity or political independence of any state, or in any other manner inconsistent with the Purposes of the United Nations."

Forth, a series of events such as the drive for the conclusion on the ROK-Japan military agreement, declaration on strengthening of the comprehensive alliance defense posture in the 2+2 meeting (*June 14 when the ministers and secretaries of defense and foreign affairs in the US and S. Korea met), and ROK-US-Japan war drill is concerned about as the steps for forming the ROK-US-Japan trilateral alliance and the ROK-US-Japan MD system. Along with China and Russia's recent joint military exercise for the 1st time in 100 years in the west sea, Japan's attempt to dispatch Aegis into the west sea of the Korean peninsula under the excuse of North Korea's rocket launch [for satellite on April 13] and US aircraft carrier's deep entry into the west sea, it already tells of a skirmish aspect of the new cold war in the Northeast Asia.

Sixth and finally, the trilateral war drill conducted in the southern sea of the Korean peninsula in the name of maritime security this time means the most advanced military vessels of Japan not to mention those of US can conduct military drill near the sea of the Korean peninsula in the name of maritime security in the coming days, too. It also means the Jeju naval base that is forcefully built despite numerous problems and concerns could be used as the outpost against China. In such case, there is no guarantee that the Japanese SDF war vessels not to mention US military would not enter before and after the ROK-US-Japan joint maritime drill. It is horrible for the Island people if the Japanese SDF vessels make entry into the port because they remember the Japanese 'Gyul No. 7 operation *,' that could scorch the Jeju Island at the end of the Pacific War, [1938 to 1945].

(* on Operation Gyul No 7: At the end of the Pacific War, Japan realizing her coming defeat upon the failures in Okinawa following those in Guam and Philippine attempted to end the war in whatever advantageous condition. Therefore she chose the Jeju Island as the last resisting post to stop the US military's landing on the Japanese main land. Framing possible 7 US military attack routes, she gave operation names such as Gyul No. 1, 2...7. Among them, No. 7 was most emphasized. Following it, military power was increased and the whole areas regardless of coast and mountain areas became fortified in the Jeju Island. At the time, Island people were forcefully mobilized of labor to build such war facilities in their own land. (reference from Ohmynews)

(You can see the whole Korean version of statement here: http://cafe.daum.net/peacekj/49kU/1807)

Otherwise, the Tongil News, June 21, reports that the ROK navy and marine corps will stage the regiment level joint landing exercise in the coast of the Anmyeon Island in the west sea from June 21 to 27. The JLOTS (Joint Logistics Over The Shore ) drill in which even army also join will follow. The ROK navy headquarter stated in it June 21 press release that the exercise this time is held in nexus of joint landing operation and following munitions support for the first time in the ROK military history.

For more photos in picketing in the Gangjeong village and Osaka, Japan, see:
http://cafe.daum.net/peacekj/I51g/354