The Gangjeong villagers' statement on March 27, 2012 shows the connection between the central and Island governments and Samsung C & T, one of the main contracted companies for the Jeju naval base project (So-called Beautiful Tourism port for mixed civilian-military use). Different from the original "Memorandum Of Understanding" (MOU) by the ex-Island government and ex-ministers of the Ministry of National Defense, Ministry of the Land, Transportation and Maritime Affairs on April 27, 2009, of which the purpose was for the docking capacity for two 150,000 cruises along with military vessels, the currently flawed Harbor & bay layout by which even the military vessels cannot even freely enter, not to mention cruises has been in big controversy since last October. The villagers' recent statement provides an important clue that the project came from corporate profit-oriented greed rather than 'national security.'
(Translated by volunteers)

The Jeju Island government should not join the re-evaluation of the simulation test.
Only by that, it would avoid Island people's suspicions on it.

We have doubt why the Jeju provincial government agreed with Korea Maritime University's sailing simulation result that had exclusively been requested by the Samsung C&T Corporation. Even more suspicious of the government is that the illegitimacy of many criteria reflected in the report has been questioned. Especially for the re-evaluation, it is the prime minister office's suggestion that the possibility of cruise operation is more focused than the adaptedness for a port facility so the changing the detail rule should necessarily be led as the result unless the operation itself is judged to be impossible. Only the possibility of putting into and out the port' is to reckoned, not the moor stability, the very important function for the port. It means, in other words, that the Jeju Island government is involved in the decision highly likely to result in something that the navy has already framed. The Island government is subject to going thought the channel in an approval for the way of construction that now the navy goes ahead. 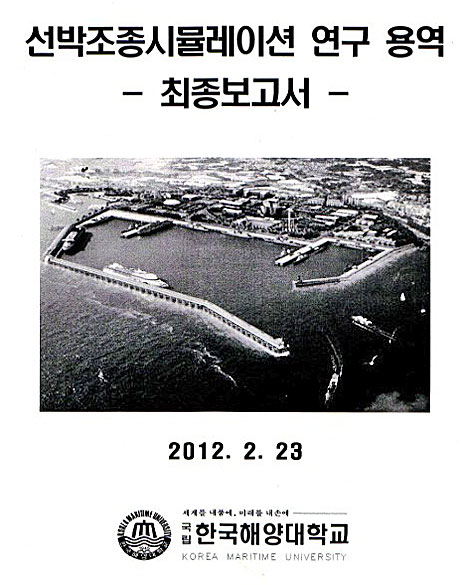 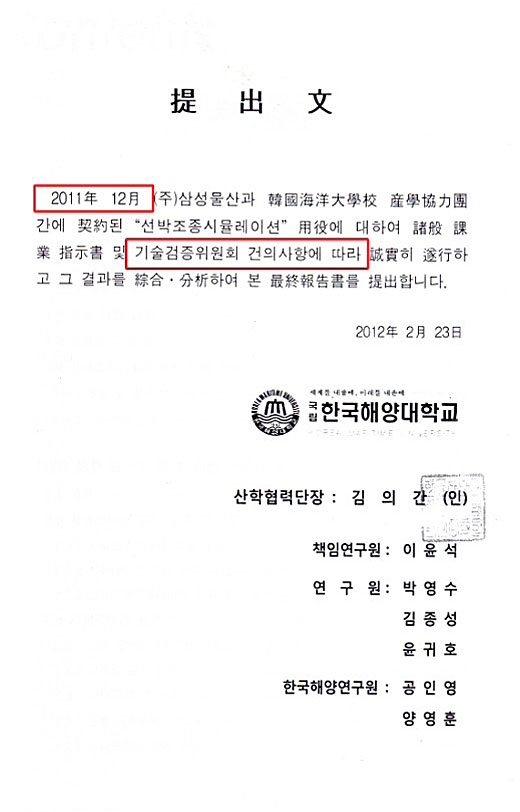 The cover of Ship operation simulation and its report on Feb. 23, 2012
(# The report subject is described as the Korea Maritime University)

Let us look at some of the reasons the simulation report must not be accepted.

The technology verification committee, however, held their meeting on Jan. 26. 2012 and on Feb 15, the report with proposals of the technology verification committee was submitted. How can then it be possible to place an order for outsourcing on Dec.12. 2011, 2 months before the report the committee proposed? There should be behind the scene between the interested parties as seen by the simulation stated with 27 knots which has orginally been claimed to be the standard of the maximum wind velocity for a safe port in the Jeju island. The report is cooked otherwise.

Another question is raised that the ordering client is Samsung C&T corporation, not the Ministry of National Defense. The client should be the Kunil Engineering which set up the master plan for the construction and took a charge of outsourcing If not the Ministry of National Defense, but how come Samsung C&T corporation only responsible for the construction site #1 in the port facility for the naval base did those instead. The report is nothing but a reference provided it is made not by the design agent, but the constuction company. Why did the prime minister's office make a choice of the report? Was the office without condition supposed to go along with what the global trader, Samsung does?

On [Jan. 21], 2011, the Jeju Island government signed a memorandum of understanding with Samsung C&T corporation to boost the export. The unveiled terms and condition in the MOU caused many suspicions. We cannot but to ask if there is a relation between the Island government and Samsung which could possibly make the simulation with 27 knots.

Lastly, 'Jeju Naval Base subcommittee' of the Special Committee on Budget and Accounts of the National Assembly advised last October to the prime minister's office that the technology verification committee be organized with the same number of appropriate experts recommeded each by both the goverment party and opposition party in National Assembly, Ministry of National Defense, and Jeju province. The simulation must be done with the advice mentioned as such. No one our province suggested is found in the committee whatsoever.

This report should in conclusion not be and cannot be accepted. We can say that there is no use trying the re-evaluation based on the result from this report. In the meantime, Samsung C&T corporation committed illegal businesses twice for the caisson conveyence with a barge which did not undergo the safety inspection and pushed ahead the unlawful construction yesterday by drilling to blow up the Gureombi rock at night and attempting blast at dawn. The Jeju Island government must for now turn down the re-evaluation, carry out the hearing held on 29th and issue a stop order for the construction.

Tomorrow, we will address the issues on the illegitimacy and short of design criteria in this report.