Press statement upon the Jeju Forum for Peace And Prosperity
2012.06.05 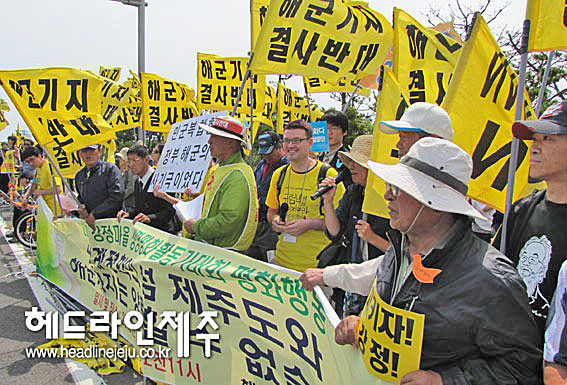 At 10am on June 1, about 100 Gangjeong villagers and peace activists gathered in front of the Haevichi hotel and resort, Pyoseon, Jeju Island, where the 7th Jeju Forumfor Peace and Prosperity was held, to hold people's own press conference. The government authority mobilized about 400 policemen (even troopers) who initially blocked people's press conference site, setting up police line in the admission part of the hotel right before the conference. After people including the village mayor Kang Dong-Kyun strongly protested it, while negotiating with the police that they do not enter the hotel, the line was removed. Later, village representatives delivered villagers' opinion statement on the demand of stoppage on the currently forcefully enforced naval base construction (destruction) to an officer of the Prime Minister Office, after some conflicts when the Seogwipo policemen, led by a chief, Lee Dong-Min from the mainland and who permitted the navy's blast since March 7, tried to prevent them. People's public relation efforts were also being done in and outside the hotel. Joyful song and dance, along with Fr. Mun Jeong-Hyeon's speech on the street completed the day's conference.

The Jeju Naval Base Construction
that Marches against the Peace and Prosperity of Northeast Asia
Should be Immediately Stopped.

Participating in the Peace Activists' Conference for the Life and Peace of Gangjeong Village held in the Gangjeong Village, Jeju, from May 30 to June 2, we have discussed cooperation measures to save and nurture Jeju as the Island of Peace. During the process, we reconfirmed the overall problems of the Jeju naval base construction which is being enforced against the will of the residents of Gangjeong Village.

First, the Jeju naval base construction is being enforced in an anti-environmental manner, even though it is clear that it would bring serious destruction to the heaven-blessed natural heritage of the island. Gureombi Rock and the surrounding sea in the coastal area of Gangjeong Village is an absolute conservation area, Cultural Heritage Administration of Korea-designated Natural Memorial No. 442, and heaven-blessed natural heritage which is close to the UNESCO-designated World Natural Heritage Site of Beom Island. However, for the purpose of enforcement of the naval base construction, the government is proceeding without proper eval!uation while expediently easing various regulations. It should be obvious that the construction runs counter to the basic purport of the World Conservation Congress that will be held on Jeju Island this coming September.

Second, the Jeju naval base construction is being anti-democratically enforced, ignoring the opposition of the majority of the villagers. Even though it is a basic role of a government to protect the right of residents to live peacefully, the Government is employing various anomalies and illegalities to deprive the rights of Gangjeong Village residents. By charging villagers as lawbreakers, it is also oppressing those who express their opposition to the illegal and abnormal enforcement of construction (destruction) in peaceful ways with arrest, detention and huge fines.

Third, in driving the naval base construction, the government is irresponsibly making economic promises to the people of Jeju Island that it cannot keep. The government has made a public pledge to provide economic compensation to Gangjeong villagers and Jeju islanders by constructing a civilian port for the simultaneous docking of two 150,000 ton cruise ships within the military port. However the Prime Minister himself has acknowledged that such a pledge can hardly be kept, considering its economic validity and reality. Also, it has never been verified whether a civilian ship of such size could make a safe port entry to the base without military control. It is becoming increasingly clear that the government has no will to seriously carry out its promise to construct a civilian port.

Fourth, above all, by militarizing Jeju Island and the Northeast Sea in the name of maritime security, the naval base construction is actually threatening the peace and prosperity of the region. The government and Navy, which has regarded itself a junior partner in the U.S.-led maritime initiative to dominate Northeast Asia of recent years, recently developed ROK-US-Japan maritime military cooperation against China. The Jeju naval base is expected to be utilized as its outpost. It is expected that US nuclear submarines and nuclear aircraft carriers, not to mention South Korean Aegis destroyers, would use the base as a port of call. This is not advisable for the peace and prosperity of the whole of Northeast Asia, not to mention the future of South Korea-China relations which will be marked by the 20th anniversary of good relations in 2012.

Jeju Island given its location should adopt a central role in Northeast Asia by making the 21st century a true 'era of peace and prosperity,' overcoming the era of confrontation and conflict. In designating Jeju as the World Peace Island the stated purpose was to make it an exchange and cooperation hub of Northeast Asia and the Sea of Northeast Asia as the Sea of Peace and Coexistence. The Jeju naval base construction runs fundamentally counter to such a vision.

The Jeju Forum, an international forum that marks its seventh year this year, aims for the construction of a Northeast Asian community for Peace and Prosperity. In this year's forum, of which the subject is 'New Trends and the Future of Asia', it is known that global corporate personnel, bureaucrats, politicians, and researchers, not to mention Prime Minister Kim Hwang-Shik, will join. To make a sea of horror and tension where the most technologically war vessels would confront each other can never be the future of East Asia. The pursuit of profit through militarism and to be silent on environmental destruction and human rights violations can never be a new trend. We urgently appeal to forum participants to seriously discuss the matters of militarization of the Northeast Sea, environmental destruction and infringement of the human rights of residents.

For the coexistence and prosperity of Asia into the future, Jeju Island should remain wholly as the Island for Life and Peace. To make the Sea of Northeast Asia as the Sea of Peace and Cooperation, the Jeju naval base construction should be stopped.