Nonviolent Resistance to US War Plans in Gangjeong, Jeju

For five years, the Gangjeong villagers on the Island of Jeju, Republic of Korea (ROK/South Korea), have nonviolently and bravely resisted the construction of a naval base on their land. The proposed ROK naval base would cover 50 hectares of prime agricultural land and would be available for unlimited use by the United States (US) navy and military and would be used to host aircraft carriers, nuclear submarines and AEGIS warships that are part of the US anti-ballistic missile defence (MD) system. It is also likely that the base would be used in the conflict with China that the US is planning and openly preparing for. The US Space Command have been computer war-gaming a first-strike attack on China (set in the year 2016) and the MD (really missile offence) is a key part of US first-strike strategy. MD systems have also proven to be capable anti-satellite weapons and they are driving a new arms race with Russia and China. 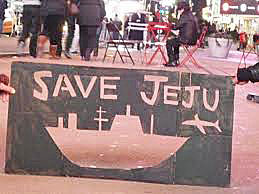 The Pentagon is now encircling Russia (which has the world's largest supply of natural gas and significant supplies of oil) and China (a rising economic power) with MD systems. The US knows it cannot compete with China economically but China imports more than 60% of its oil on ships. If the Pentagon can choke off China's ability to transport these vital resources, then it would hold the keys to China's economic engine. The proposed naval base on Jeju Island is just 300 miles from China's coastline and would become a strategic port for Aegis destroyers and other warships and would also be used by nuclear submarines. The US has over 1000 military bases around the world, (including 82 in South Korea alone) – China has no significant military bases outside of its borders. Construction of the naval base at Gangjeong only serves to further military tensions and creates an obstacle to world peace in the East Asian region.

The base will create far more problems than it will solve as China is South Korea's number one trading partner. However, the US is trying to change this pattern and has just signed a Free Trade Agreement with South Korea, despite major opposition from South Korean civil society.

The last time a military base was located on Jeju Island, in 1948, more than 30,000 people (a ninth of the population) were killed in a genocide that is known as Sasam. They were killed by the South Korean government under US military rule, 84 villages were razed to the ground and a scorched earth policy left thousands of refugees. People were not even allowed to openly talk about this trauma until 2006 when the late President Roh Moo-Hyun officially apologized for the massacre and designated Jeju an 'Island of World Peace'. You can imagine how terrible the sense of betrayal was when only 2 years later he agreed to build a naval base on Jeju.

It is not only those who wish to stop war who are concerned about the building of the naval base but also environmentalists. Jeju Island is a Global Biosphere Reserve and the village of Gangjeong is surrounded by no less than three UNESCO World Natural Heritage sites and nine UNESCO Geo-Parks and was designated one of the "New Seven Wonders of Nature." The sea in front of Gangjeong is the cleanest and most beautiful on Jeju and is the only UNESCO-designated soft coral habitat and a site of the Indo pacific bottle nose dolphins (a IUCN-listed endangered species) as well as the red-footed crab (a Korean designated endangered species). The area around Gangjeong was designated an "Absolute Preservation Zone" to protect it but the military is simply ignoring all these cultural and environmental protections.

The Gureombi rock, where many of the protests against the naval base take place, is not only environmentally sensitive but also an ancient place of prayer. It is the only smooth volcanic fresh water rock in Korea and the fresh-water springs underneath the rock are believed to be the source of the Gangjeong Stream that provides 70% of the drinking water for the southern half of the Island. The first explosions of the rock by the destruction companies, Samsung and Daelim, led to pollution of this water source and there are fears that the drinking water will be badly affected.

The resistance of the villagers and their supporters has been remarkable despite being repeatedly subject to arrest, imprisonment and heavy fines. The South Korean military claim that the base construction approval process was approved by a democratic vote was exposed as a lie. Only 87 people, some of whom were bribed (out of 1800 residents) had an opportunity to cast a vote, by applause only. When the village elected a new Mayor and held their own re-vote, that fairly included the entire community and was done by proper ballot, 94 percent of all villagers opposed the military base—yet the government and military refused to recognize these results. The democratically elected Mayor of Gangjeong who oversaw the 94 percent vote was recently released from 3 months in prison for standing up for the rights of his villagers.

The village have organised press conferences, lobbied the Island Council in Jeju City and the central Government in Seoul, organised peaceful demonstrations and vigils and in return have been subjected to police harassment, assaults, corrupt bribery which has divided their community, and illegal measures that have taken away their ancient rights to pray at their sacred rocks and to use the local public port.

As the destruction work progressed the nonviolent resistance developed into daily blockades with around one or two hundred people regularly taking part. Their protests are peaceful and nonviolent but the force exerted against them is increasingly violent, especially with the general election approaching on 11th April. The Lee Myung-Bak government is enforcing destruction as fast as possible so that the situation becomes irreversible. Over 400 people have been arrested since January 2010 and that number is now rising rapidly since the blasting of Gureombi rock began on 7th March. Ominously over one and a half thousand riot police have been deployed from the mainland - something that has not been experienced on the island since the days of the 1948 massacre. The protesters are now peacefully entering the site to try and disrupt the destruction, they are breaking down the fences and cutting through the razor wire, taking boats and kayaks over the sea to gain access to the sacred rock – and each action is being met by more and more violence. The courage of these protesters is remarkable as they face harassment and violence perpetrated by police and by the Daelim and Samsung security guards. People have been beaten, had their teeth knocked out and suffered concussion and broken bones.

None of the cases filed against these assaults have been allowed into the courts. Nor have the road closures, the public port closures, the maritime police stealing of public kayaks and the illegal erasure of the environmental protections been subject to judicial inquiry.

The resistance continues however. For instance on 3rd April 5 pastors broke through the fence in the early morning and were arrested after entering the military construction site to try to stop the blasting.

This brave resistance needs the support of peace loving people all around the world. There will be a demonstration outside the Korean Embassies in London and Paris on 9th May. If you can organise similarly in your own country then let me know.

• Matthew Hoey's article on the Save Jeju website at http://www.savejejuisland.org/