Revoke the navy license for reclamation of the coast and sea in the base project area!
Restore the absolute preservation area!
Stop the blasts and destruction! Stop the human rights violations! 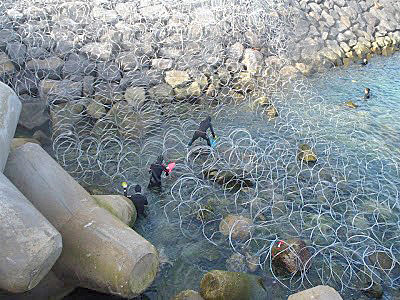 While March 20th was filled with joy because of the bail release of movie critic Yang Yoon-Mo who had been on a 42 day prison fast, March 19th, the day before was the day that Samsung and Daelim, the navy-contracted construction companies, began blasting the Gureombi Rock coast (not merely blasting around the edges like before but the rock itself). This was one day earlier than announced. Then on March 21st, Choi Yoon-Hee, the Chief of Joint Naval Operations visited Jeju to meet Governor Woo Keun-min and the largest amount of explosives thus far (1.5 tons) was used to blast Gureombi 14 times. The next day on March 22, 1.4 tons were used in the blasting.

Meanwhile, the cassion-carrying floating dock used by Samsung C & T to bring the cassion to Gureombi has been continually operated illegally without the required inspection. At the same time the coast guard have declared that from April 13, kayaking and swimming in the area off the coast of Gureombi will be illegal, punishable with up to a million won fine. As the Jeju press puts it, "The navy and its contracted companies are enforcing construction (destruction), totally ignoring the judicial system of the Republic of Korea."

Such cruel blasting, illegal destruction, and daily human rights violations, including violent arrest and humiliation (intentionally used to threaten and weaken the will of the both Korean and international protestors) have all been happening while waiting for the result of the Island government hearing sessions regarding the current layout of the naval base and whether it can really dock two 150,000 ton cruise ships according the original claims of the navy. During this meeting, the Island government was expected to order the halt of the construction, but instead has delayed and delayed. As a result, the villagers and island people have been holding large protests in front of the provincial government hall on March 20 and 22, demanding a prompt halting order from the governor. This includes the stopping the construction (destruction), revoking the navy's license for reclamation of the coast and sea in the base area, and the restoration of the absolute preservation area that was annulled suddenly and undemocratically in 2009.

However, on March 23rd, the Jeju provincial government has betrayed the people's wishes yet again. In the midst of their delaying the result (first to the 22nd then to the 29th) they suddenly announced that they will compromise with the central government and accept the layout of the naval base according to the analysis provided by the Ministry of National Defence, without any outside analysis as they had previously demanded. It is clearer than ever that the provincial government does not have any sincere respect for the wishes of the people or to stop the destruction. In response, Island activists began a sit-in outside the provincial hall on March 26th. However, only a few hours later, the government violently attacked the sit-ins with hundreds of police. Without any proper notice, tents were destroyed. On tent was dragged 5 meters while women were still inside, resulting in a head injury for one woman who is now in the hospital. One person was arrested.

However, solidarity for the struggle has been growing nationally and internationally with Jesuit priests leading regular protests in front of the Samsung C & T office in Seoul, netizens' on-line protests and calls for boycott against Samsung, the Seogwipo Youth Coalition of 17 townships having a solidarity visit to Gangjeong, protests in London, New York, Paris, and other cities around the world. On April 1st, hundreds of workers will gather in the village to remember the famous April 3rd Jeju massacre. They will use this time to bring more attention to the struggle of Gangjeong Village.

1. Please take some time to write protest letters to the government and the naval base planners and contractors, demanding an end to the blasting, construction, and violation of human rights.

2. Please write a letter to Woo Keun-Min, Island governor, to order the halt of the construction; to revoke the navy license for reclamation of the coast and sea in the base project area; and to restore the absolute preservation area that was annulled for the naval base project through undemocratic procedures in 2009. Also please demand that he give a sincere apology to the people attacked on the night of March 26th.

These actions will really help to stop the on-going destruction being caused by the naval base project.

3. Please also consider signing the petitions on Avaaz
http://www.avaaz.org/en/save_jeju/?vl
and distributing this letter among your networks.

For more immediate situation updates, join the facebook group, 'No Naval Base on Jeju' .
This newsletter/appeal is updated every week.
Thank you,
The Extended International Team of Gangjeong Village
March 27, 2012