No Military base! Yes, Life and Peace Island! 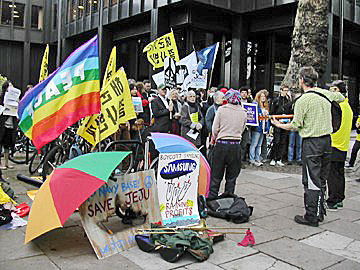 London solidarity protest in front of the South Korea embassy
on May 9 (Photo: Angie Zelter)

The overseas solidarity movement has reached one of its high points with protests in more than 8 cities and 7 countries around the world after a call for solidarity by Angie Zelter, a UK activist who stayed in Gangjeong for a month earlier this year. Simultaneously, Mr. Koh Gil-Chun, a Jeju artist, initiated several protests in the western part of the US on April 25 and 30, and also joined a Code Pink protest, 'Women Boycott Samsung,' in San Francisco on May 9. Voices against the base can also be heard in Cuba as well. Especially, the voice of Koreans residing outside of Korea has grown remarkably, setting a new international stage for the struggle. Paradoxically, this can be seen as a direct result of the South Korean government's attempts at oppressing international solidarity efforts, as well as the destruction of the village and blasting of Gureombi Rock. The navy has almost finished blasting, per their plan, around 10% of Gureombi Rock and is ready to install some facilities there.

Meanwhile, the government is pushing to define the water area of the naval base project as an exclusive military zone, violating its own agreement with the Island government in 2009 and with the recommendations of the National Assembly in 2011, both great betrayals to the public. They plan to complete illegal revisions of the "Enforcement Order of the Port Act" and the "Enforcement Order of the Protection of Military Bases and Installations Act" in June. Additionally infuriatingly, on May 10, Jeju Governor Woo Keun-Min, who has continuously postponed the decision about whether to order a halt to the destruction, made clear that he is ready to accept a military only port (as opposed to the promised civilian-military dual-use port) if the entry and exit of two 150,000 ton cruises is guaranteed, which itself is not realistic and clearly yet another deception.

It is truly time for the Island people to decide their fate: Jeju as a War Island or as a Life and Peace Island. In May, the people are concentrating on getting the truth out about false government propaganda, especially regarding the claims that the port will be a "dual-use civilian-military" port. They also continue to demand that Jeju Governor Woo order a stop to the destruction, though he is expected to accept the base. In June, the struggle to stop the establishment of a military protection zone in Gangjeong will be important. Then, as more and more Jeju residents learn the truth that the port will be solely a military base and not dual-use, it is purposed that total opposition to the base across Jeju Island can reach at least 70% by July.

An international week of solidarity for Jeju has been proposed for September, when the Jeju will host the World Conservation Congress. As the movement grows, October will be a time to focus on urging the National Assembly to cut the base budget completely, finally leading up to the presidential elections in December.

The Ministry of Land, Transport and Maritime Affairs (MLTM) revealed that they will be making revisions to the "Enforcement Order of the Port Act". The changes will designate parts of the Naval Base as a trade port. The Gangjeong Village Association challenged this news saying that when considering the issues of safety, security, maintenance, and more, it is obviously illegal and illogical to have 2 completely opposite facilities, a civilian and a military port, in the same port.

Governor Woo Keun-Min delayed his decision regarding the of halt construction (destruction), yet again.

Meanwhile the Save Our Sea (SOS) team has been monitoring the environmental violations of the navy's construction in and around the sea. They have found that many of the silt protector curtains (pollution blocking layers placed in the ocean around the site) are only decorations, without the actual pollution blocking curtains underneath. Is it any surprise that the navy continues their destruction anyway, even though these curtains were greatly damaged by recent storms?

May 5:
Headline Jeju (a local media outlet) exposed that the Ministry of National Defense (MND) has been secretly planning revisions to the "Enforcement Order of the Protection of Military Bases and Installations Act". While the original agreed upon plan promised the port would be divided between civilian and military areas with appropriate jurisdiction given to each, the planned revisions would designate the water of port as simultaneously civilian and military and place the entry and exit of cruise ships under military jurisdiction. This late and suspicious revision clearly points to a military only port.

Otherwise, in celebration of Children's Day (a Korean national holiday), there was a booth set up to introduce Gangjeong and sell t-shirt in JinJu. This day was also the Jeju traditional day, "The Day of the Sea".

Meanwhile, in Washington, D.C., a lively demonstration took place in front of the White House in support of the Gangjeong struggle. At the same time a similar peace demonstration was also happening as a part of a peace bicycle journey by some members of Veterans for Peace called, "Sam's Ride." It turned out that the Sam's Ride members were aware of the Jeju base issue and they made a speech in support.

May 6:
Lively solidarity demonstrations took place in Fukuoka, Japan, and in front of The Arch of Triumph in Paris, France.

May 7:
The villagers and The Island committee against the Jeju Military Base held a press conference in front of the Jeju Island government building denouncing the fraud of the civilian-military complex tourist port.

The Democratic Lawyers' Association submitted a statement to the Legislation Office on the illegality of the government's recent revision attempts to the two acts, and urged the Government to annul the naval base project. Also, 97 people including celebrities such as Bishop Kang U-Il made another statement opposing the naval base.

Meanwhile, the Seogwipo Coast Guard made public that they had booked charges against Samsung C & T personnel and the ship captain of the caisson-carrying floating dock, as they were in violation of ship safety laws, and had been operating without mandatory inspection. Thus the people's claim since March regarding the illegality of the floating dock was validated.

The students of Blooming School and peace activists started the day with 100 bows and meditation in front of the naval base gate. Additionally, bereaved families from the Yongsan Tragedy visited Gangjeong to show their support.

May 8
The Gangjeong village held a community event on Parents' Day (a Korean national holiday) for the first time in six years. It is a part of the villager's difficult ongoing effort towards reconciliation and recovery of their broken community. However, this event was damaged by the navy and its affiliated government officers who stole away pro-base elders for a separate event of their own, to the fury of Mayor Kang Dong-Kyun and other villagers.

Meanwhile workers from Daelim, one of the main construction companies, violently attacked Catholic priests in robes in front of destruction gate.

In the afternoon, professors and peace activists held a forum on "Alternatives to the Jeju Naval Base," at the island government building. During the forum, Prof. Shin Yong-In presented his vision of Jeju as an "island of natural healing." He and other professors will continue to organize a series of similar forums around the island.

While a candle vigil was held in Gujwa, on the northeastern part of Jeju Island, in Seoul, a regular event called "Gangjeong Camp" began from today. It will involve film screenings, peace lectures, candlelight vigils, 100 bows for life & peace and many other activities.

May 10:
Jeju Governor Woo Keun-Min held a press conference implying that he is ready to accept a military only port (as opposed to the promised civilian-military dual-use port) if the entry and exit of two 150,000 ton cruises is guaranteed, which is of course yet another lie as the simulations clearly show that there is not enough room in the port layout for cruise ships to maneuver.

Meanwhile, the Jeju local court dismissed the villagers' lawsuit against the Seogwipo Chief of the Police. The Gangjeong Village Association had filed a suit against him regarding his total prohibition of rallies and demonstrations about the naval base issue in Gangjeong, declaring such a prohibition unconstitutional.

May 11
Professor Yang Yoon-Mo was sentenced to two years probation. The government prosecutors had requested that he be given a two years prison term.

May 12
The Pan-Korean Committee to Stop the Jeju Naval Base held a bicycle parade through Seoul. The parade passed the National Assembly, the Ministry of National Defense and ended in front of the Jogye Buddhist temple where the Gangjeong Camp to stop the naval base is being held.

Solidarity protests were held in New York City. In the village, there was a general meeting with around 50 Gangjeong peace activists to share about the future direction of the struggle.

1. Please take some time to write protest letters to the government and the naval base planners and contractors. Demand that they revoke the Jeju naval base project in the Peace Island; that they should stop lying that the port will be a civilian-military port; and that they should not enforce the revision of the two acts which would establish the construction (destruction) zone as a closed military facility, which is illegal and a violation of government's promises to the people. Please tell them that the base construction (destruction) continues at the cost of destruction of a community, democracy, human rights, the environment, and the peace of the Gangjeong villagers. Tell them that the base being built in the Jeju will make Jeju a target of war, contribute to political instability in Asia, and only profit the arms industries such as Samsung and Daelim who employs thugs to oppress protesters. Please remind that the current government oppression to people is reminiscent of a 2nd 4.3.

2. Please write a letter to Woo Keun-Min, Island governor, to immediately order the halt of the construction (destruction); to stop the deceptive propaganda regarding the so-called "Beautiful tourism port for mixed civilian-military dual-use" which in reality is only 100% a military base; to revoke the navy license for reclamation of the coast and sea in the base project area; and to restore the absolute preservation area that was annulled for the naval base project through undemocratic procedures in 2009. Also please demand that he give a sincere apology to the people attacked on the night of March 26th when he mobilized government officers to suppress the people's sit-in.

3. Please write to the Democratic United party members to work harder to revoke the Jeju naval base project. Please tell them that the so-called "Beautiful Tourism Port for Mixed Civilian-Military Use", has been confirmed as a fraud and that the party should resolutely reject the Lee Myung-Bak government's enforcement of Jeju naval base project under such deceptive propaganda. Please remind them that the party's election pledge was to "re-examine the project from the beginning point" and that they should also consider a special inspection system for the Jeju naval base issue, regarding crimes committed by the government. Pressuring them is very important, as their party is the main opposition party:

5. For more immediate situation updates, join the facebook group, 'No Naval Base on Jeju'.

This newsletter/appeal is updated every week.
Thank you,   The Extended International Team of Gangjeong Village
May 12, 2012