Emergency rally in Gangjeong on Nov. 10 with commemoration on Yang Yong-Chan 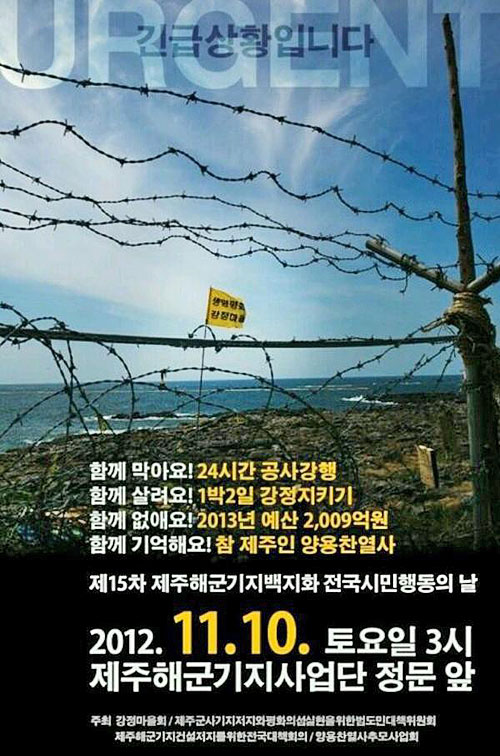 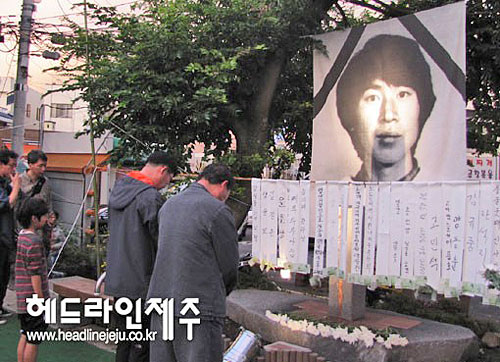 "Since I aspire the Jeju as the site for our life and nest for our livelihood rather than as the 2nd Hawaii of global tour site that exploits our fleshes & bones and makes us plaything, I walk this way crying for the stop of the Jeju Special law, abolishion of the 2nd overall development plan, and for the smashing of the Minjadang (* Democratic Freedom Party, ruling conservative righ wing party from 1990 to 1995)."

According to Prof. Shin Yong-In, legal advisor to the village association, there was a pan-Island resistance against the central government's development drive in 1990s. The Jeju Special Law has been nothing but the legal justification of big corporations' exploitation of the Jeju. The immolation of Yang Yong-Chan who resisted against capitalism development in the Island sparkled the Island people's rising up during the period.

Because of Island people' very such resistance, the Island government at the time was eventually forced to set up some important systems to preserve the pristine nature of the Jeju from the central government's thoughtless development. One of the most important systems is the Absolute Preservation System that is supposed to 'absolutely' protects the nature environment of Jeju, icluding the coasts of it. Ironically, it was the very current governor Woo Keun-Min who established the system as the governor, then, too. (1991 to 1993). Woo becoming the Island governor again in 2010 has not cancelled ex-Island Kim Tae-Hwan government's undemocratic decision to abolish the absoulte preservation areas in the Gangjeong village (the Joongdeok coast of which most part we call the Gureombi Rock and the vicinity part of the Gangjeoeng stream) to enforce the Jeju naval base project in 2009 despite the Island Council's demand on it through the general meeting vote in March 2010.

"The cancellation of the absolute preservation areas in Gangjeong in 2009 can be interpreted that the central government unilaterally INFRINGED the indigenous rights on nature protection, as well as their human rights and creatures' lights to live in their havitats," Prof. Shin says.

Woo himself affiliated with big corporations like Samsung, is neglecting his duty while he has authority power to ORDER the navy to stop the illegal and forceful Jeju naval base construction(destruction). His words on so called Civilian-Military Complex Port for Tour Beauty and two 150,000 ton cruises are nothing but sugar-coated words to blind the Island people through false promise of local economic development. 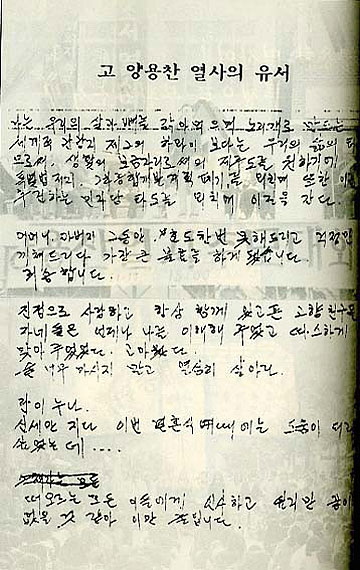 "Since I aspire the Jeju as the site for our life and nest for our livelihood rather than as the 2nd Hawaii of global tour site that exploits our fleshes & bones and makes us plaything, I walk this way crying for the stop of the Jeju Special law, abolishion of the 2nd overall development plan, and for the smashing of the Minjadang
(* Democratic Freedom Party, ruling conservative righ wing party from 1990 to 1995)."

What is the difference between his period and our period? The Jeju, the Government-designated Peace Island on Jan. 27, 2005 is now greatly suffering for the enforced and unrelaible war base construction in the Gangjeong village. The right wing conservative repeteadly say that they want the Jeju, the 2nd Hawaii, mix of militraism and tourism (so that big corporations like Samsung can wholly exploit the Jeju Island). 24 hours construction started since Oct. 25, 2012. The navy is crazy to enforce construction (destruction) to get the 200.9 billion won budget for the project next year (92.5 % of budget will go to big corporations like Samsung and Daelim who are in chrage of harbor and bay construction). Police even from all the main land are mobiliaed for 24 hours while people protest 24 hours, being carried by ambulance to hospital, injured, robbed of their sleep. The daily peaceful 100 bows at every 7am have been even disrupted since then as the police forcefully remove the bowers from the construction gates. Catholic priests in robes are taken away during the mass only for the construction trucks to pass through the gates. Women are lifted their cloths, scratched by the policewomen's nails when the policewomrn forcefully remove them from their protest sites. Men are dragged on the ground while the police dragg their one leg. People are in careless situation especially in the nights when the police and policewomen only concern to move and throw them from the protest sits like freights. A woman was almost at the risk of losing her life when the policewomen neglected her after throwing down her on the ground on the 1st night of Oct. 25.

Here are some sketches. 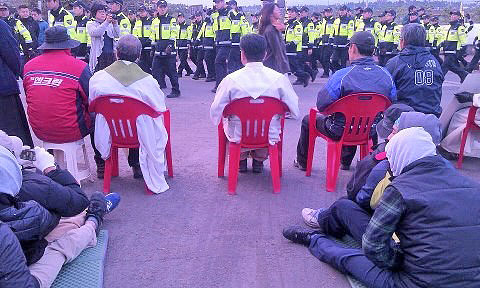 Around 5pm, Nov. 5/ Catholic priests in robes are surrounded by the police during the mass
and removed from the protest sites. 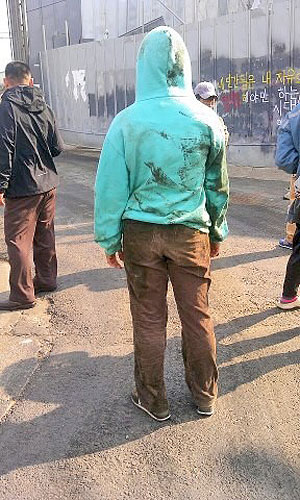 Around 3:30 pm, Nov. 4/ A woman peacekeeper was dragged on the ground. It is common that policewomen carelessly carry woman peacekeepers during their roughing out of them and male police surrounded women once they are detained in the police circles. 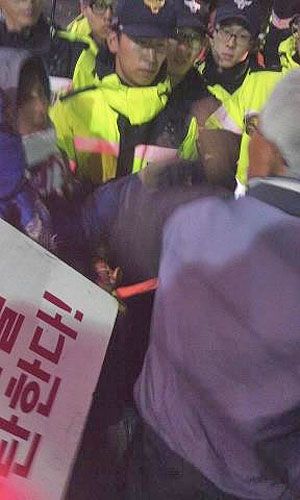 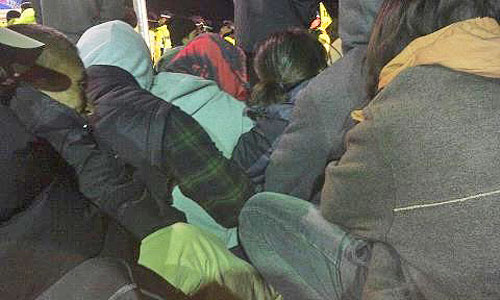 Around 12:10am, Nov. 6
The police usually come every two hours but this time it is in 1 hour 40 minutes. People in solidarity right before the police's roughing out of them. 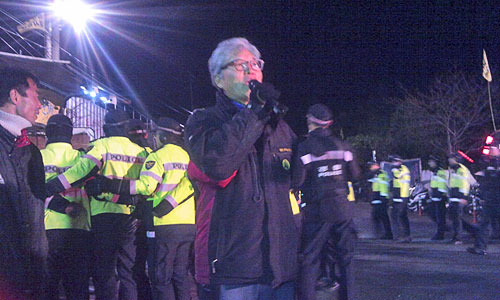 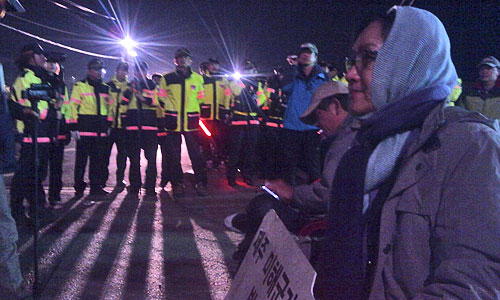 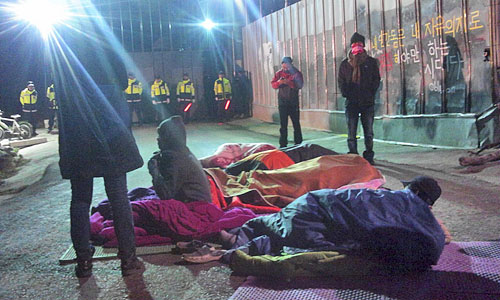 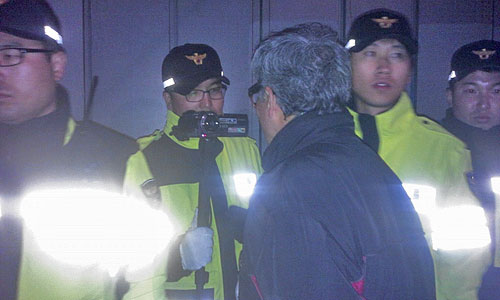 Since Nov. 5,
the numbers of the policemen have been more increased. police are wielding more physical power still the people are resisting with all their energy. The interval time between police roughing out of people have become more often. From usual one hour interval to 30~40 minutes during the day and from usual two hour interval to 1 and 30~40 minutes interval. It is clear that the navy would more and more rushy for the destruction.

It is in this vein that the people nationwide mobilize themselves to stop the 24 hour construction (destruction), to stop the navy and big corporations' greed on budget and to save the Jeju, the Peace Island, succeeding the spirit of Yang Yong Chan, who remained his poignant words that he want the Jeju to be the Site for Life rather than 2nd Hawaii. The 15th Nationwide citizen action day to revoke the Jeju naval base project will be held on Nov. 10.

Let's save together! Save Gangjeong by staying over the nights!

Sponsored by
the Gangjeong Village Association,
Jeju Pan-Island Committee for Stop of Military Base and for Realization of Peace Island (26 groups) and
National Network of Korean Civil Society for Opposing to the Naval Base in Jeju Island (125 groups)

How you can help us?
Please pressure the ROK National Assembly members to cut all 200.9 budgets for the Jeju naval base project next year.
Contact english@asssembly.go.kr or Moon Jae-In, Permanent Advisor, Democratic United Party, Presidential candidate: moonriver365@gmail.com