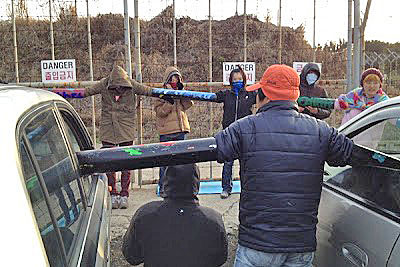 Today, 19th March, young protesters who tried to block explosives from leaving
the factory had their arm tubes hammered open causing severe shock and injuries.
2 of those 10 arrested have been hospitalised.
Image source at: http://www.jejusori.net/news/articleView.html?idxno=112734

On March 15th 2012, Benjamin Monnet, a dedicated French peace activist who has been active in Gangjeong for 9 months now, was forcibly deported by the Korean Government.  An injunction order was issued against him and he was deported within 24 hours despite a legal suite that had been filed immediately. Angie Zelter, a British nuclear disarmament activist and Trident Ploughshares founder was issued with an exit order for her involvement in the same struggle against the naval base despite charges against her that she has not been able to defend in the courts. Currently, there are three political prisoners against the Jeju naval base: Fr. Kim Jeong-Wook and Rev. Lee Jeong-Hoon (arrested on March 9) and Yang Yoon-Mo (arrested on Jan. 30). Yang Yoon-Mo arrested for obstructing a construction truck has been on a hunger strike for nearly 40 days now, and is experiencing heart problems.

On March 14, Elliott Adams, Tarak Kauff and Mike Hastie, all members of the U.S. group, Veterans for Peace, were either taken from the plane to Jeju or not allowed to leave the Jeju airport. One of them was detained in the airport, Seoul, for nearly 6 hours. The members of the Veterans for Peace protested at the South Korean Consulate in New York City, on March 16 once they arrived back home.

Today, 19th March, young protesters who tried to block explosives from leaving the factory had their arm tubes hammered open causing severe shock and injuries. 2 of those 10 arrested have been hospitalised.

The blasting of Gureombi Rock has continued 4 to 6 times each day since March 7th. Gangeong village representatives met Korean high-ranking government officials who visited Jeju on March 16th. The government officers stated they would continue to enforce the construction and ignored the villagers' passionate appeals to save their home from the naval base. The government officials also rejected the demand made by the Island Government, Island Council and Jeju-based ruling and opposition party members for a temporary delay to the construction whilst the plans are re-evaluated.

Samsung, the main navy-contracted company, along with Daelim, plans to go ahead on March 20th with the blasting of the exposed rocks on Gureombi (not merely blasting around the edges which is what they have been doing the last few days). Please take some time to write protest letters to the government, navy base planners and contractors to stop the blasting, construction work and the violation of human rights.

Please write a letter to Woo Keun-Min, Island governor, to 'command' the construction work to stop; to revoke the navy license for reclamation of the coast and sea of the base project area; and to recover the absolute preservation area which was annulled for the naval base project through undemocratic procedures in 2009. This will really help to stop the ongoing destruction being caused by the naval base project.

Please also consider to sign the petitions on Avaaz
(http://www.avaaz.org/en/save_jeju/?vl)

and to distribute this letter among your networks.

This newsletter/ appeal is updated every week.
Thank you
from the Extended International Team of the Gangjeong Village
March 19, 2012