02.11.2015
I Oppose the Expansion of US Bases in Okinawa via NO BASE
沖縄とつながる京都の会

Okinawan elders (WWII child survivors of the US-Jp battle in Okinawa) lead struggle to save Henoko's dugong & coral reef ecosystem, one of Okinawa's last remaining cultural heritage sites, The US & Jp destroyed almost all of Okinawa's material culture during WWII, & the US military seized & destroyed most of what little remained to build training bases during its 1945-1972 military occupation of the Ryukyuan islands.
The US & Jp govts chose the 70th anniversary of the Battle of Okinawa & the 60th anniversary of the start of the Okinawan Movement for human rights, property rights, cultural heritage preservation, security from military violence, & democracy to reassert their now joint violent military hegemony over Okinawa. For 70 years, Okinawans have called upon both nations to recognize the Okinawan struggle for human rights, property rights, & rule of law. The US & Jp treatment of Okinawa is analogous to the Soviet forced annexation of Eastern Europe which ended in the 1980s, and the Chinese occupation of Tibet. 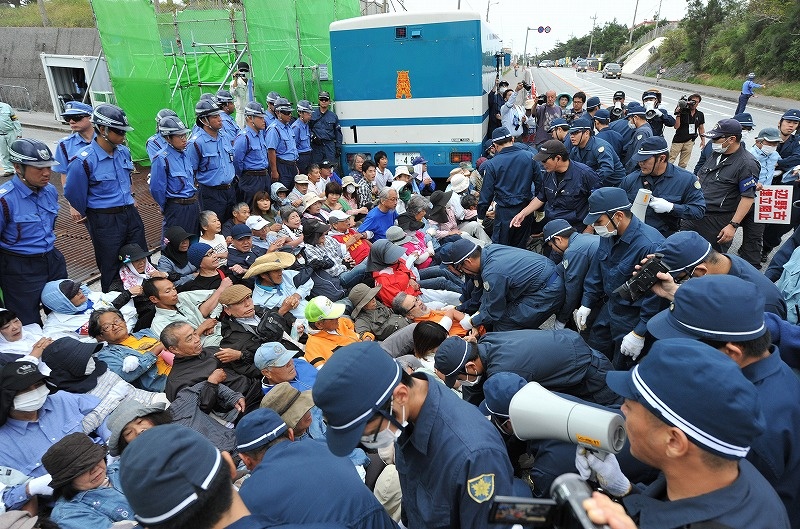 
Gov. Onaga filed a complaint against the Jp govt's use of force to attempt landfill of Okinawa's most important natural cultural heritage site, the dugong & coral reef ecosystem at Henoko to build an offshore US military training airstrip & military training port. The US has used Okinawa as a primary training base for 70 years, including for the wars in Iraq & Afghanistan, and for past wars in Vietnam & Korea, claiming such training "deters" attacks on Okinawa. However, most of the population consider 70 years of US military seizures & destruction of entire villages & material heritage, despite local democratically expressed opposition, a 70-year war against Ryukuan cultural heritage, natural environment, local communities, & democracy itself. The Okinawan Movement for human rights, property rights, democracy and security from military violence began 60 years ago, after US seizures of homes by "bayonet and bulldozer" and the rape/murder of a 6-year old Okinawa girl by an American sergeant.
http://www.japantimes.co.jp/…/okinawa-files-complaint-over…/

Aki Uehara:
11.3 Screening of Chie Mikami's new film on the Battle for Henoko. Mikami is also documenting the struggle to save Yanbaru, the subtropical rainforest inhabited by endangered species, which the US seized for "jungle warfare training" and weapons (Agent Orange) testing prior to the Vietnam War. For 2 decades, locals & their Jp & global supporters have demonstrated against the US-Jp plan to expand US military training & weapons testing in Yanbaru & Henoko, Okinawa's most important natural cultural site.
This is the 70th anniversary of the Battle of Okinawa, when the Jp govt. sacrificed Okinawa to hinder the US invasion of Japan. !/3 of the Okinawan population was killed during the battle of attrition, during which the Jp military used civilians as human shields, and then ordered their suicides. Okinawans thought the US victory would bring democracy and peace, but instead, the US instituted an even harsher military rule in the islands, seizing & destroying entire villages by force, while allowing soldiers to rape (& kill) children & women, with impunity. 2015 marks the 60th anniversary of the start of the Okinawan Movement for human rights, property rights, democracy, security from military violence, & peace.